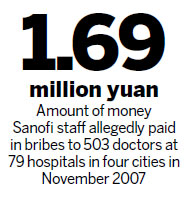 Allegations by a whistle-blower that French pharmaceutical giant Sanofi-Aventis bribed more than 500 doctors in China in late 2007 to boost its sales are being taken "very seriously" by the company.

An anonymous whistle-blower on Thursday told the 21st Century Business Herald newspaper that Sanofi staff paid about 1.69 million yuan ($276,000) in bribes to 503 doctors at 79 hospitals in Beijing, Shanghai, Hangzhou and Guangzhou in November 2007. The company also allegedly bribed 43 doctors at five hospitals in Beijing in the form of cash payments and gifts each month from May to October in 2007.

British drugmaker AstraZeneca and Belgian drugmaker UCB recently admitted they are being investigated by Chinese authorities.

The 21st Century Business Herald, based in Guangzhou, Guangdong province, surmised that the whistle-blower worked in Sanofi-Aventi's upper management in China based on the nature of the content provided to the publication.

The whistle-blower said the bribes were given in the name of research spending and would only give the name "Pei Gen" to the newspaper.

"Sanofi is confident in our business operations in China and committed to conducting its business globally with integrity. We are determined to respect the ethical principles governing our activities and are committed to abiding by the laws and regulations that apply in each country where we operate. We have zero tolerance to any unethical practice," the company said. "At this time, it would be premature to comment on events that may have occurred in 2007."

The National Health and Family Planning Commission recently passed a plan to fight what it called inappropriate behavior in selling medicine. Li Bin, head of the commission, stressed in July that medical reform is needed to combat bribery in an industry where many Chinese hospitals rely on the sale of medicine.

Currently, the central government sets a pricing standard for medical services provided by public hospitals. Many experts believe the policy keeps the price of services at an artificially low level and puts pressure on hospitals and doctors to sell more medicine and possibly accept bribes.

In 2012, Beijing introduced new regulations on public hospitals to emphasize quality medical services and discourage hospitals and doctors from relying on the number of prescriptions they dole out.

"Currently the public healthcare insurance sector pays hospitals based on each item of the service they provide, encouraging them to choose more expensive items, from which doctors can get more illegal kickbacks," Niu said.

An advanced payment system is also effective, said Wang Hongzhi, a healthcare industry consultant. With this plan, a local government healthcare agency pays a hospital a specified amount of money to cover healthcare fees. If there is a surplus, the hospital pockets it; if there is a deficit, it must share the costs with the local agency.

"If the market is more competitive and there are more private healthcare providers, that will also help solve problems in the industry," Niu said.