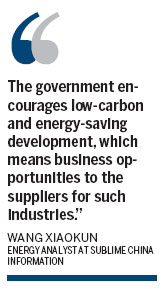 China will speed up development of the energy-saving sector and make it a pillar of the national economy by 2015, top policymakers said on Sunday.

The State Council vowed in a statement to spur technological innovation, expand demand for energy-saving products and boost the environmental-protection service industry.

According to the State Council, the value of the energy-saving industry's output will reach 4.5 trillion yuan ($728 billion) by 2015, an average annual growth of 15 percent.

The government will play a leading role and allow non-State capital to invest in energy-saving projects.

"The government encourages low-carbon and energy-saving development, which means business opportunities to the suppliers for such industries," said Wang. "For instance, the equipment manufacturers for power plants and grid will benefit from the policy."

Ren Junming, a commentator on Xinhuanet.com, said the policy is significant in terms of expanding domestic demand and promoting upgrading of traditional industries.

China will invest 1.8 trillion yuan in the renewable energy industry during the 12th Five-Year Plan (2011-15) and spend another 2.3 trillion yuan on energy-saving and emissions reduction, Xie Zhenhua, deputy director of the National Development and Reform Commission, said in late July.

China has committed to reduce its carbon emissions per unit of GDP by 40 to 45 percent by 2020 from the 2005 level and raise its non-fossil energy consumption percentage to 15 percent of its energy mix.

From 2006 to 2012, China's energy consumption per unit of GDP was reduced by 23.6 percent, equivalent to a reduction of 1.8 billion metric tons of carbon emissions. Market share of high-efficiency energy-saving technology and equipment will rise from the current 5 percent to 30 percent by the end of 2015, Xie said.

"Facing the promising green and low-carbon markets, related companies should increase their investments in research, development and the application of low-carbon technology to strengthen their competitiveness in the global market," said Xie.

"By coping with climate change and adapting to the new trend, companies can make profits and fulfill social responsibility at the same time."

The market share of energy-efficient products will increase at least 50 percent by 2015, the State Council said.

The new energy vehicles industry will embrace its rapid development thanks to the policy.

In Beijing, Shanghai and Guangzhou, use of new energy vehicles for public transportation will be extended. Such buses will account for more than 60 percent of all buses by 2015.

Fonterra gets further hit as it recalls milk powder

Chinese take a shine to fine china from UK

Snowden's father to leave for Russia

Chinese put on alert in Afghanistan