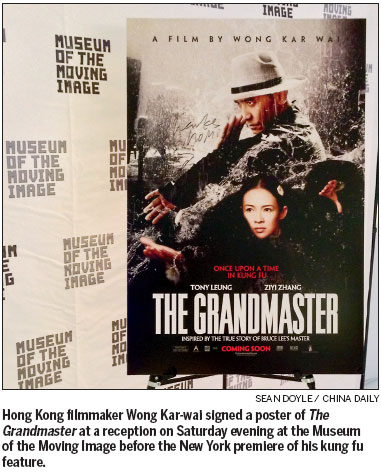 Bringing The Grandmaster to the big screen was a 15-year labor of love for Hong Kong director Wong Kar-wai.

The event was held at the Museum of the Moving Image in Queens, New York, and included a post-screening onstage interview with the director. A question and answer session with the audience followed, during which one audience member shouted from the second to last row that she had worked briefly for Wong on the film and was wondering if he would be her reference for her film school application.

"Talk to me after," the 57-year-old director sporting his signature sunglasses replied.

Wong Kar-wai is widely considered one of the most influential film directors of his generation, both inside and outside of Asia. Saturday's premiere was the centerpiece of a comprehensive retrospective of Wong's work, which began on July 12 and includes all ten of his feature films. Between now and Aug 24, the retrospective will wind up with screenings of My Blueberry Nights, In the Mood for Love and 2046.

Wong's latest feature, in which he seeks to reinvent the martial arts genre, reunites Tony Leung and Zhang Ziyi, the stars of his science-fiction epic 2046. Neither actor has a background in martial arts, and both spent three years training for the film's fight sequences.

"I always wanted to make a kung fu film, but there are so many kung fu films made before me and so I had to find my angle," Wong said during the onstage interview.

In the film, Wong seeks to capture the nobility and formality of Chinese kung fu as it existed in the 1930s and '40s, as well as today with its competing schools and philosophies.

The director said he considered naming the film The Grandmasters, but his son talked him out of it, arguing that the film was more about the idea of what it takes to be a grandmaster than the grandmasters themselves.

Wong said he wanted to set the record straight on the Ip Man story, as opposed to merely dazzling audiences with another kung fu movie. The Grandmaster coincides with another Ip Man film released this year, Ip Man: The Final Fight, by Hong Kong director Herman Yau, who also directed The Legend Is Born: Ip Man (2010). Wong's film encountered many delays, including Leung breaking his arm during rehearsal and the day before his first shoot. Wong spent 22 months on a budget of $25 million to shoot the film.

Wong missed a number of release dates before The Grandmaster finally reached theaters on the Chinese mainland in January. The film is Wong's greatest commercial success to date, having earned more than $50 million worldwide. In China, it out-grossed his previous four features combined.

In contrast to Wong's usual free-form style of directing, the filmmaker insisted on strict historical accuracy in this film. After sifting through piles of books, journals and archival materials, including a home video the Ip family presented to Wong in their living room of Ip Man in his studio three days before his death, the filmmaker spent three years interviewing hundreds of mainland martial artists in preparation for the script he co-wrote. The resulting story includes many Ip Man proteges.

"To make this film is like a dream come true," Wong said. "I grew up on streets full of martial arts schools, but I was never allowed to practice martial arts."

When he was growing up, he said, martial arts schools were dark and mysterious and sometimes associated with the triad gangs - groups that became prevalent in Hong Kong during the 1960s and '70s. No parent would encourage their kid to practice martial arts, said Wong.

At the end of the film, a boy stares intently through the window to Ip Man's martial arts studio. "That could be Bruce Lee or that could be me because it was always my dream to walk through the door to find out what's so special, what's so mysterious about Chinese martial arts," Wong said. "With this film, I walked past this door and I find it very satisfying."