Despite progress, stereotypes in US pop culture persist 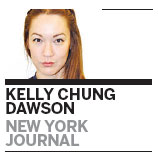 Late last week the Media Action Network for Asian Americans made public a letter to Fox network asking that the pilot for Dads, an upcoming sitcom, be reshot for racist regurgitations of Asian American stereotypes.

In a letter to Fox Entertainment Chairman Kevin Reilly and other network officials, MANAA founder Guy Aoki pointed to scenes in which a main character dresses as a "sexy Asian schoolgirl" to seduce a Chinese businessman, and later describes his penis as "tiny". He also noted the use of "Orientals" and quoted a character's warnings against trusting Asian people: "There's a reason Shanghai's a verb."

"Our community can't continue to be the target of racially insensitive jokes," Aoki wrote. "Fox has an opportunity to fix fatal flaws in the pilot and to improve the show's chances for success when it premieres next month.We are asking you to reshoot the inappropriate scenes of the pilot. Considering the consistent feedback from our community and television critics in general - and the creators saying they hadn't properly defined their characters nor gotten used to their actors when they shot that first episode - this sounds like a no-brainer."

A spokesperson for Fox said that the network is in the process of drafting a reply to Aoki's letter that will be made public.

Fox had already been criticized for the show's crass handling of stereotypes, with The Hollywood Reporter describing Dads as unfunny and racist. But actor and star of the show Seth Green said that the point of the show is to serve as a platform for discussion of racism among older generations, pointing to old TV favorites All in the Family and The Jeffersons.

"It's helpful to have an Archie Bunker saying these things so Rob Reiner can say, 'Archie, that's not OK,'" Green told critics.

But Asian American advocacy groups believe that in the instances in which a racist character is not chastised for his offensive comments - and the moment is instead played for laughs - more damage is done than if Asian Americans were to remain off network television altogether, which is also an ongoing struggle. Writing characters that defy Asian American stereotypes would not only be more politically correct, it would require fresher writing, Aoki said.

Other network television shows that have featured overly broad depictions of Asian Americans include 2 Broke Girls and Sullivan & Son, the latter of which the Pittsburgh Post-Gazette described as alternating between "broad-as-a-barn stereotypes and politically incorrect specific".

More encouraging is ABC's recent announcement that it has green-lit a pilot of celebrity chef Eddie Huang's memoir Fresh Off the Boat, with a Chinese American family as its focus. The show will be helmed by Don't Trust the B**** in Apartment 23 creator Nahnatchka Khan, also the children of immigrants.

But Asian American advocacy groups have had much to complain about this year. Earlier this month LA-based band Day Above Ground triggered an internet backlash when it released the music video for a song called "Asian Girls", in which lines like "Your momma's so pretty/ Best nails in the city" and "I love your creamy thighs/ Oh your slanted eyes" exuberantly mined almost every stereotype of Asian culture. Asian American advocacy groups and Asian American-focused critics responded quickly, and the group ultimately took down the offending video, but only in order to protect their own safety, they told media outlets. The group insisted that the video had come from a good place, and was meant as humorous satire.

In a particularly tone deaf interview with an NBC affiliate station in San Francisco, the group said that "there's guys in the band with Asian women".

Levy Tran, the female model who appeared in the music video, later tweeted: "I sincerely apologize to all who feel that I set Asian women back 50 years. I know I lost respect from a lot of people. It wasn't my intention."

Aoki of AAMA believes that racism against Asian Americans is more openly expressed in pop culture and media because the fear of angry reprisals from the Asian American community is so much less than the fear of "black people who are angry", he said. Other critics have also argued that the "model minority" myth has created a feeling of safety around mocking a group that is not commonly viewed to be disadvantaged or disenfranchised.

Onus on US to improve military ties

Trustee council may be answer for reforming