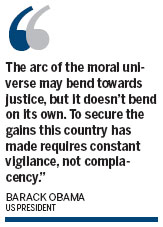 When Martin Luther King Jr gave his "I Have a Dream" speech on the steps of the Lincoln Memorial on Aug 28, 1963, he described a nation where people of different colors would live together in equality.

"Because they marched, America became more free and more fair, not just for African Americans, but for women and Latinos, Asians and Native Americans, for Catholics, Jews, and Muslims, for gays, for Americans with a disability," Obama told a gathering of tens of thousands of people Wednesday afternoon at the "Let Freedom Ring" ceremony marking the 50th anniversary of the King-led March on Washington for Jobs and Freedom.

But Obama said that journey is still not complete.

He cited the facts that black unemployment has remained almost twice as high as white unemployment and the gap in wealth between races has not lessened.

"The position of all working Americans, regardless of color, has eroded, making the dream Dr. King described even more elusive," said Obama, with former presidents Bill Clinton and Jimmy Carter, both Democrats, also addressing the crowd in a persistent drizzle.

Obama admitted that task would not be easy. "Entrenched interests, those who benefit from an unjust status quo, resisted any government efforts to give working families a fair deal, marshaling an army of lobbyists and opinion makers to argue that minimum wage increases or stronger labor laws or taxes on the wealthy who could afford it just to fund crumbling schools, that all these things violated sound economic principle," he said.

"We'd be told that growing inequality was a price for a growing economy, a measure of this free market, that greed was good and compassion ineffective, and those without jobs or health care had only themselves to blame," he went on.

Obama pointed to the nation's divided politics by saying that the March on Washington teaches Americans that the promise of the nation will only be kept when people work together.

Among a host of speakers on Wednesday, there were no senior Republican representatives.

Some Republican officials, including House Speaker John Boehner, said they had been invited but declined after participating in a Congressional ceremony.

Obama made his speech at 3:07 after bells rang at 3, the time King delivered speech 50 years ago.

Li Zongwei, a graduate student at Northwestern University, was among the few Chinese or Asians in the large crowd on Wednesday.

Li said she could recite King's "I Have a Dream" speech as a teenager when it was in her English textbook.

She believes King's speech is inspirational to people everywhere, including the Chinese.

"After half a century, people gather to commemorate the event and the journey. Although after such a long time, a lot of things have not been achieved, there is still hope and the goal can be attained later, and there is still a long way to go," said Li, who, as a student journalist, recently interviewed Lei Yixin, the Chinese sculptor who created the statue of Martin Luther King Jr on the Mall in Washington DC.

Deron Tross, an African American from New Orleans now living in DC, agreed there is still a long way to go to realize King's dream.

He blamed the government and in-fighting among African Americans for the lack of progress, saying education, voting rights and health care are the key issues that need to be addressed.

In their speeches, Bill Clinton and Jimmy Carter both blasted the Supreme Court's ruling in June that struck down key provisions of the 1965 Voting Rights Act, which requires local governments to get federal approval before changing voting laws.

A Gallup poll released on Wednesday found that 60 percent of US blacks believe whites have better chances than blacks to get jobs for which they are both qualified, while 39 percent believe whites and blacks have equal opportunities.

Blacks' views are more positive now than they were in 1963, when 74 percent thought whites had better chances at jobs, according to the survey.

Alfred Scott, an African American in his 70s, and his wife Joan, who is white, travelled from Sacramento, California, for the event.

"Quite a lot of King's dream has come true, but there is still a long list of problems, such as employment and education," he said.

Taylor Branch, an author who won the Pulitzer Prize for his book on King, believes the slow progress in some areas is because Americans no longer talk about race the way they used to.

"We're nervous about mentioning race, but it's still a big issue that divides us," he said.

"They want President Obama to be a black president on their terms, meaning not to talk about being black too much. And he doesn't, because he's got a lot of advisors who say he gets in trouble whenever he does," Branch said.

Envoy to seek release of US citizen

US vows action in Syria