What can children teach the world? That is a question that many famous authors have tried to explore in their books, and now Christie Hsiao wants to give it a go.

Hsiao's new book Journey to Rainbow Island, to be released in early November, follows 11-year-old Yuning on a journey to secure sacred stones that have been stolen from her home island. Through the book, Yuning has to "overcome not only the darkness attacking her home, but also the scars of sadness that mark her own heart," according to a synopsis.

Hsiao, who was born in Taiwan, said that she's the perfect person to write a children's book because she still sees herself as a kid sometimes. "I'm a child at heart," she said in an interview. "I love video games, fantasy, fiction, [genres that show] beyond what we can control in real life."

To her, writing a book with a fantasy edge is the best way to reach an audience with a message, she said, especially if a child is at the heart of the story.

"Children see everything in reality. They know the truth," she said. "Because adults learn from social norms, and they become afraid, but children are fearless."

Hsiao, also CEO of the Los Angeles-based entertainment company Serenity Media Group, said great storytelling can bring everyone together, and that is why her company is interested in producing work that will make a global connection.

"We're at an edge. I've always wanted to not just bridge the Chinese, Asian market with the Western one, but [be] global and [go] global," she said. "I want to be the leader, to be the first to make it happen - to really mix the ratio and have everyone come together."

Hsiao is watching the movie industry in China closely to see how it progresses, but she said it is still in its infancy. The movies from China, for example, don't have crossover appeal outside of niche films, she said: "We all know that China is such a huge market, but the film market is still at its very beginning. The creativity, they're not accustomed to be able to imagine, to create. They're boxed in."

She said that the resources in China are vast - primarily the money - and the country does have the infrastructure, but the talent and the stories aren't there yet.

Last week, a groundbreaking ceremony was held for the Qingdao Oriental Movie Metropolis, an $8 billion venture from Chinese billionaire Wang Jianlin to create a Chinese Hollywood. Movie stars and film executives from all over the world attended the event, including Leonardo DiCaprio, Nicole Kidman and movie mogul Harvey Weinstein.

Hsiao, who is good friends with Wang's son, was also at the ceremony. "It was amazing. It's how the Chinese do things: it's massive, it's big. You have to make the best impression, you invite the best people," she said. 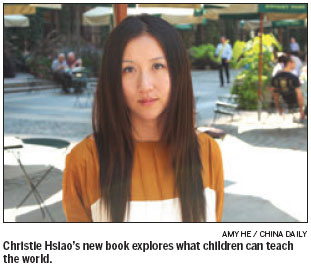 DC shutdown gets social media in China all in a twitter

Chinese investment in US grows