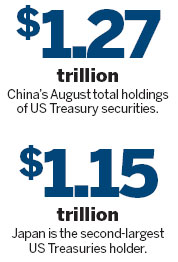 Expert says talk of quantitative easing should not affect buying

China's holdings of US Treasury securities in August dropped to a six-month low, according to a new report from the US Treasury Department.

While China remained the largest foreign holder of US debt, the country cut its holdings by $11.2 billion, bringing August's total to $1.27 trillion from July's $1.28 trillion, figures released on Tuesday showed. That was a reversal from China's Treasuries boost in July, when it added $3.5 billion.

Japan trailed China as the second-largest Treasuries holder at $1.15 trillion, and continued to increase its holdings in August. Japan purchased an additional $13.7 billion.

Overall foreign holdings of long-term Treasuries decreased by $8.9 billion, the Treasury Department said in a statement, compared to an increase of $31.1 billion recorded in July. Overseas holders of long-term US securities reduced both stocks and government bonds.

Though Chinese holdings fell in August, analysts said that the decrease only represents a small part of China's overall holdings and does not reflect major economic change.

"In these recent months, China has still been accumulating reserves overall at a very high rate," said David Dollar, senior fellow of Global Economy and Development at the Brookings Institution. "Since they're still accumulating reserves and the fact that they didn't accumulate more Treasury during that one month, that suggested that during that one month, they were diversifying away from Treasuries in terms of new acquisitions."

Dollar said that talks about the US tapering off quantitative easing won't affect China's holdings significantly because reserves are safe assets and reserve holders understand these low-return assets, so Fed policy may not have much impact.

But because China is continuing to accumulate reserves at a rapid rate, "that suggests that they're not making as much progress with restructuring or rebalancing as they could," Dollar said. "I don't think it's in China's interest to keep accumulating reserves, so I think it make sense for them to allow more flexibility in the exchange rate, and then they wouldn't accumulate reserves, and they wouldn't have to worry about where to put all these reserves."

Treasury's latest foreign-holdings report was delayed almost a week because of the US government's 16-day shutdown.

Before the US met the Oct 17 deadline for extending its national debt, Chinese Deputy Finance Minister Zhu Guangyao expressed concern over the possibility of a US default and urged a solution to protect Chinese investments.

Dollar said that he expects the US dollar to remain the primary reserve currency, so "naturally, the holders of US Treasuries would like to see less dispute in the United States about, for example, raising the debt ceiling, or keeping the US government going."

US securities holders want to see US stability, "so you'll continually hear voices urging the United States to have a more rational political process," Dollar said, but added that as long as the dollar remains the primary currency, "frankly, holders of reserves don't have a lot of additional options."