The FBI announced on Monday that the suspect in an arson attack targeting the Chinese consulate in San Francisco on the New Year's Day was a 39-year-old Chinese national with a US permanent residency, who surrendered himself to local police by calling 911 two days after the blaze.

David J. Johnson, FBI special agent in charge, told the press on Monday that the suspect was named Feng Yan, has permanent resident status in the United States and was being held in federal custody.

Feng, a resident of Daly City near San Francisco, he told federal agents he was driven not by politics but by "voices he had been hearing", according to the FBI.

The FBI had excluded the possibility of terrorism, politics or civil rights. "Right now, we're looking at this as a purely criminal matter," Johnson said.

FBIspokesmanPeter Lee told China Daily on Monday the case was not related to the blaze that took place at the security gate at the rear of the building in 2008.

By now, what I could say is that the suspect has not been confirmed as having any relation to any organizations, Lee said.

Though no one was hurt in the nighttime attack on Jan 1, the fire left the consulate with a charred doorway, dirty facade, broken windows and a damaged lobby.

Surveillance cameras at the consulate showed the arsonist got out of a van with two buckets of gasoline, splashed the fuel on the building and then set it ablaze. The FBI recovered a white mini-van believed to be the one in the video.

Wang Chuan, the consulate spokesman, said after FBI's press conference on Monday that the consulate has noted the efforts made by the US to investigate the attack and bring the perpetrator to justice.

"We urge the US to learn lessons from this incident, take effective measures to ensure the safety, security and dignity of Chinese diplomatic and consulate missions and staff in the US," he said.

San Francisco Police arranged 24-hour surveillance after the incident and workmen changed the door on Monday. 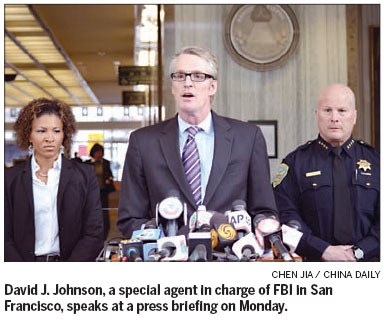 Yellen confirmed to head the Fed