By Sophie He (China Daily USA)

Huge demand continues to drive smartphone assembly on the mainland and, with the industry thriving, manufacturers are eager to expand overseas. All are eyeing Hong Kong to take the first step. Sophie He reports.

It's another payoff for Hong Kong's enormously influential standing in overseas markets. Mainland manufacturers are headed here to introduce their products to global consumers.

ZTE Corp, the mainland mobile-phone maker, opens its first retail outlet in the HKSAR in the next few weeks, promoting its "Nubia" mobile phones - a secondary line targeting the retail market.

It is acknowledged that Hong Kong presents a limited market. But total shipments of smartphones to the city are still substantial. Local retailers do thriving trade, selling mobile phones to international travelers, some of whom actually come expressly to buy mobile phones, Ni Fei, Nubia's general manager, told China Daily. That market reality established the "necessity" for Chinese smartphone manufacturers to be represented here.

"We plan to open a flagship store in Hong Kong in the first half of this year," Ni said. He added that because the intention is to showcase the Nubia line, the store will be in a central location.

"We want this subsidiary brand to be distinguished from ZTE. Traditionally, ZTE mobile phones were sold to telecom operators," Ni said. Currently, Nubia phones are available only through the company's online portals.

The Nubia line's reputation got a huge boost when First Lady Peng Liyuan was spotted snapping photos with a Nubia mobile phone (Z5 Mini) when she accompanied President Xi Jinping on a visit to Europe.

"President Xi and the First Lady were visiting Germany, and according to what I know, the First Lady wanted to use a domestic mobile phone. Many domestic phone makers sent her their products," said Ni.

"I was delighted that one of our Nubia handsets was chosen by the First Lady," he said, adding that the sales of that model spiked after photos of Madame Peng using the phone exploded on the Internet.

"The 'China Dream' begins with 'Made-in-China'," ZTE boasted in a subsequent post on its Weibo site.

Ni said that in addition to Nubia's marquee store in Hong Kong, Nubia handsets will be sold by retail chains like Fortress in the city. ZTE is talking with telecom operators about offering contract services.

Nubia handsets sell for between 1,499 yuan (HK$1,828) and 3,999 yuan. Aside from traditional ways to promote the brand, the company plans more promotion through social media, like Weibo and Facebook.

"Promotion on social media is relatively cheap and effective. As the younger generation don't watch much TV, they rely more on the Internet and tend to have more trust in the information they get from social media," he said.

Ni said since the launch of the Nubia line in late 2012, about one million units have been sold across the product line. ZTE expects sales this year to exceed that. The mainland is expected to generate the highest sales with the rest distributed among Hong Kong and Asia Pacific countries.

Huawei Technologies Co Ltd, the world's second-largest telecom equipment maker and ZTE's major competitor, is stepping up its profile with plans to enhance its position in Hong Kong's consumer market.

"Hong Kong is quite the opposite of the western European market. The European market is stable," Shao Yang, chief marketing officer of Consumer Business Group at Huawei, told China Daily.

Shao pointed out that while Hong Kong is relatively small, many brands compete here for market recognition. "It will be difficult for Huawei to increase its brand awareness in Hong Kong, but I think it will be the next step for us," he said.

"Hong Kong is a strategically important market to the group not because of its market size or the revenue generated here, but because of Hong Kong's strong influence in other markets," Richard Zhang Zhenjun, chief of the Hong Kong Representative Office for Huawei, said in an interview. He added that Huawei prefers to launch pioneer projects, technologies and products in Hong Kong. If the new endeavors work out here, they have a better chance for success in other areas of the Asia Pacific.

Huawei is also working with telecom operators like PCCW, SmarTone, and China Mobile (Hong Kong), while its mobile phones continue selling through open channels such as Fortress stores.

To differentiate itself from other mobile-phone brands, Huawei will launch more smartphones that support dual SIM cards.

Xiaomi is the third most important Chinese manufacturer that until now has limited its sales of handsets to online portals. The company's smartphones have attained popularity among younger mainlanders - moving the company to test its wings in the international market.

Currently, Xiaomi is also cooperating with Hong Kong mobile operator PCCW-HKT on sales of Hongmi in Hong Kong. The two companies are offering Hongmi smartphones on extended phone-service contracts. A subscriber pays HK$148 monthly for 18 months or HK$198 for 12 months. The free smartphone is part of the package.

A senior Xiaomi executive told China Daily the company's business model, focusing on online sale of handsets promoted through social media, worked out well on the mainland. It plans to use the same marketing in Hong Kong as a test platform before going global with the strategy.

The major challenge for the company in Hong Kong is that the e-commerce market here is not as highly evolved as on the mainland. "Unlike the mainland where people shop online, people in Hong Kong prefer to shop at physical stores. I think it may take consumers some time to develop the habit of purchasing online," the executive said.

Chinese smartphone makers keen to enter the Hong Kong market have their sights set on even more ambitious goals overseas.

ZTE recorded 40 million smartphone shipments in 2013, and targets 60 million sales this year. According to David Dai Shu, department director at ZTE's Corporate Branding & Communications Department, the company's principal markets are the mainland and the United States.

"Our largest market (for smartphone sales) is still the mainland, but sales have been increasing rapidly in the US," Dai said, adding that the company sold 10 million terminal devices in the US last year, amounting to $1.2 billion in sales.

Dai is optimistic about ZTE's future prospects. "Many mainland smartphone manufacturers are exploring business overseas, but many of them may find it difficult to enter the US market. The US terminal market is dominated by telecom operators. If you want to enter the market, you have little choice but to cooperate with telecom operators. Luckily, ZTE has good cooperation with tier-one operators in the US," he said.

Dai said ZTE already has the largest market share in the US pre-paid, mobile-phone market, and it plans to enhance its position in the contract-phone position. 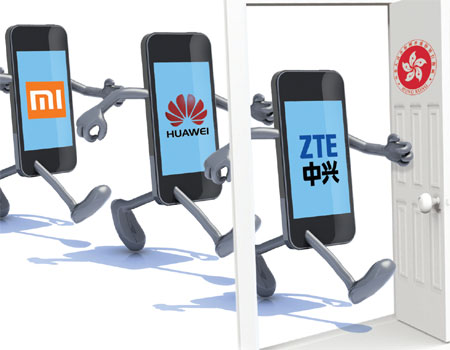 Xi: There is no gene for invasion in our blood

China: US must be objective about Asia tensions