Exhibit highlights efforts of China, US 70 years after WWII

Georgetown University Professor Wang Chi said that many young people nowadays, both Chinese and Americans, may not even know China and the United States once were allies.

That is one reason why his photos are in an exhibition commemorating China's partnership with the US during World War II at the Russell Senate Office Building in Washington through Friday.

"I think the contributions China has made towards the end of WWII and global peace have to be known by all," said Wang, co-chairman of the US-China Policy Foundation (USCPF).

Wang provided photos from his personal collection for the exhibition titled The US-China WWII Alliance, which commemorates the 70th anniversary of the end of World War II. The exhibition opened on Monday in the building's rotunda.

The themes of the photos range from Japanese soldiers slaughtering Chinese peasants to the American Volunteer Group (known as the "Flying Tigers" in China), to American and Chinese soldiers celebrating the end of the war together.

"I've kept these photos for around half a century," Wang said. "Some were gifts from the China Archives, and some were from Taiwan Archives."

Wang has been a professor of history at Georgetown University since 1969, and has consulted on US-China relations for both the White House and the National Academy of Science in China.

Wang also said that China's military forces made great contributions and sacrifices in exchange for the better life people now enjoy. His intent was to honor that part of history.

"I was very surprised to see (a photo of) Zhu De and Mao and Premiere Zhou here," said Zhenyang He, a Chinese high school student who is currently studying in Washington, when he walked past the exhibition.

He does not believe that young Chinese were unaware of China's history, and was especially fascinated by a group photo of the famous Chinese leaders during the war. He took a picture of the historic photo using his smartphone.

"What really interests me is the diversity this exhibition presents," He added, noting that there are pictures from a variety of historical periods during the war.

USCPF is a nonprofit organization seeking to promote greater understanding between policymakers, researchers and government officials of the two countries.

Liu Jingyang in Washington contributed to this story. 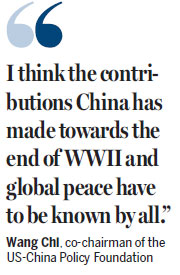 Top China, US military brass hold talks at the Pentagon

Pentagon to greet General from China