"I know this is a big number, but I'm not surprised by it at all," said Yongxiang Wang, a professor at the Marshall School of Business at the University of Southern California in Los Angeles.

"The size, if correct, is amazing," said Gary Hufbauer, a senior fellow at the Peterson Institute for International Economics in Washington.

A total of 100 suspects from eight gangs have been detained since the police launched the investigation in September of last year, Xinhua reported on Nov 20. Police say the gangs were loosely united by a ringleader who operated dozens of shell companies in Hong Kong. The companies were involved in foreign exchange transactions and money laundering. In December 2014, arrest warrants were issued for 56 suspects and more than 3,000 bank accounts were frozen. It took almost a year for police to sort through the over 1.3 million in suspicious transactions.

Hufbauer said that the apparently large amount of illegal capital outflows from China "suggests that rich Chinese, whose money is tainted by corrupt activities, are desperately trying to move their funds to safer locales". 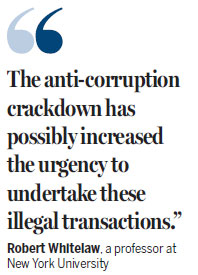 Wang said that as an economist, he is interested in knowing whether transaction frequencies and volume increased after President Xi Jinping's anti-corruption campaign. "I want to know whether these transactions increased right after the unexpected arrival of [inspectors from the central government] (once we know the sources of the money). This would say something indirectly about whether this is about corrupt officials trying to send money out to a foreign country like the US or Canada."

Robert Whitelaw, a professor at New York University's Stern School of Business, said Chinese investors have a natural desire to diversify and move money out of China and purchase international assets of all types.

"This portfolio diversification would allow them to reduce risk without sacrificing returns. Clearly, the limit on taking capital out of China limits the opportunity for diversification and therefore encourages investors to attempt to get around the restrictions," he said.

"People, who fear that their money will be seized perhaps because it was obtained illegally, in the first place, would obviously want to get money out of China and out of reach of the authorities. The anti-corruption crackdown has possibly increased the urgency to undertake these illegal transactions."

Amy He contributed to this report.