Reflecting on the inaugural class of 111 students selected for the Schwarzman Scholars master's degree program at Tsinghua University in Beijing, Stephen Schwarzman said his goal for the program is to do more than develop a new generation of scholars.

"We are looking to produce leaders that can help build a better relationship with China and the world," Blackstone Group LP CEO Schwarzman told China Daily on Monday. "It is my intention that the Schwarzman Scholars will return home and provide leadership in a changing, complex and dynamic world. I have every confidence that this class will be such leaders."

The first class of Schwarzman Scholars - selected from more than 3,000 applicants - is composed of students from 32 countries and 75 universities with 44 percent coming from the US, 21 percent from China, and 35 percent from the rest of the world. They will take classes and live at the newly constructed Schwarzman College on the Tsinghua campus. Expenses for each scholar are funded by the program.

In interviews, several scholars discussed how the Schwarzman program will fit into their career goals.

Jintian Li, 26, graduated from the University of Rochester and also spent time at the University of Oxford. He has been working for the National Basketball Association focusing on expanding the league's sponsorship business internationally.

"It's certainly a great honor to be part of the inaugural class," he said via Wechat. "The level of resources that has been put into the program is unprecedented, and the opportunity to learn from political and business leaders is important. I'm also excited to be back in Beijing for a year after spending the past eight years studying and working in New York." 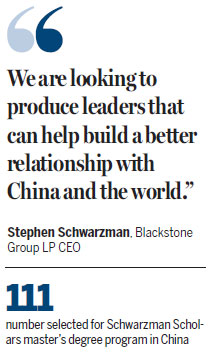 Angela Chen, 22, is from Vestal, New York, and is an economics major with a concentration in healthcare management at The Wharton School of the University of Pennsylvania in Philadelphia.

"I have strong personal ties to China," said Chen, whose parents are from Shanghai. "I have already studied the American healthcare system. This will be an incredible opportunity for me to study China's healthcare system and how the country provides health care to 1.4 billion people."

"For me the key will be to help people understand how the US-China relationship will affect our lives here and in China," said Addison McLamb of Wake Forest University in Winston-Salem, North Carolina. The 21 year-old McLamb is from Lexington, North Carolina, and will join the US Army once he completes the Schwarzman program.

McLamb is a Chinese major at Wake Forest. "I am interested in how the different movements have helped to define China through its long history. It's a country of fascinating contradictions," he said.

Kes Rittenberg, 21, is from Oakland, California, and is studying economics and Chinese at New York University.

"This will give me an opportunity to immerse myself in China, its people, language and culture," said Rittenberg. "My goal is to use my knowledge about China to bring China and the US closer together through investments."

The 111 scholars were selected through a rigorous process designed to evaluate intellectual and academic ability, leadership potential, strength of character, the ability to anticipate emerging trends and the desire to understand other cultures and perspectives. Approximately 300 semi-finalists were invited for in-person interviews in Beijing, Bangkok, London or New York before international panels composed of CEOs, former heads of state, university presidents, non-profit executives, journalists and other leaders.

Schwarzman unveiled the program in 2013 and modeled it after the Rhodes Scholars program. He personally contributed $100 million to the program and is leading a fundraising campaign to raise an additional $350 million from private sources to endow the scholarships in perpetuity.