An air war for Beijing has begun, with Los Angeles as the staging ground.

The bid came about two weeks after rival Delta Air Lines applied to the DOT for the same route. It will now be up to the US government to decide who gets the coveted slots to China's capital, as there are only seven available.

"Because this is a contested matter pending before the department, we cannot comment substantively," said Caitlin Harvey, DOT public affairs specialist.

Air China, based in Beijing, currently has the only direct flights from Los Angeles to Beijing.

And why do the airlines want the LAX slots?

Los Angeles is the largest market for flights to Asia, responsible for 21 percent of all US-Asia demand, according to Delta. American reported a profit of $7.6 billion in 2015, up from $2.9 billion in 2014. The increase was attributed to growing demand in the Asia-Pacific region, Robert Isom, American's chief operating officer, said in March, adding that the airline is concentrating on the region, particularly China.

"This new route would solidify Los Angeles as American's West Coast gateway to Asia and it would be our only Beijing access from the western United States, creating new connections to one of Asia's major business and leisure destinations," said Andrew Nocella, chief marketing officer for American Airlines, in a statement.

"Beijing is one of the world's great cities, and nonstop service from LAX would be a great complement to our existing China service," he said.

Speaking for Delta, Ranjan Goswami, a vice-president of sales, said: "Delta's new nonstop service to Beijing continues our expansion in China, providing our business customers with access to Beijing and beyond through our partnerships with the market's leading carriers, China Eastern Airlines and China Southern Airlines."

If approved, Fort Worth, Texas-based American would begin LAX-PEK service on Dec 16 - and so would Delta.

The route-jockeying is the latest salvo in the ongoing competition between the two major US carriers.

"They are the two largest airlines in the world and - in terms of total dollars - the two most profitable too," wrote Airline Weekly in February. "And they are at each other's throats. American and Delta are at war.

"This escalating war, however, is about much more than just talk. It's also about philosophy. Each carrier, for example, adopted diametrically opposed approaches to managing fuel risk. American abstained from hedging completely. Delta? Forget mere hedging. Sure, it did that. But it also bought itself an oil refinery!" Airline Weekly wrote.

In a March 28 filing to the DOT titled "Answer of American Airlines, Inc and Motion to Institute a Carrier Selection Proceeding", Howard Kass, American Airlines' vice-president of regulatory affairs, wrote: "Wherefore, American objects to Delta's application and respectfully urges that the Department institute a carrier selection proceeding to allocate the remaining China frequencies, consider Delta's application contemporaneously with American's application, and grant such further relief as the Department deems warranted."

"Not to try to guess what the DOT will do, but American could really use this route," Reed said. "American badly trails rivals United and Delta in Asia, particularly in West Coast-to-Asia flying. 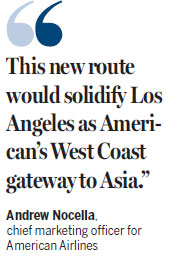 "United has the best West Coast hub in San Francisco, where it serves about a dozen Asia destinations," Reed said. "Over the past few years, Delta has built a hub in Seattle, and it is increasing Asia flights from there."

Reed said "Delta would say it should not be penalized for taking the risk of trying to build a hub in Seattle, defying the wishes of Wall Street, which favors stringent capacity discipline for airlines, not aggressive expansion," he said.

Delta, based in Atlanta, offers nonstops to Beijing from Seattle and Detroit.

In February, American began running direct flights from LAX to Tokyo's Haneda Airport, taking slots previously used by Delta for service from Seattle. The two are expected to compete for new daytime slots at Haneda.

"Sadly for American, LAX is a tough place to operate," Reed said. "Although all three US global carriers operate hubs there, LAX is too congested for any of them to accumulate sufficient gates to build a major hub.

"Also, LAX is extremely competitive because so many foreign carriers fly there, so it is impossible for US hub carriers to control pricing," he added. "Nevertheless, American has said repeatedly that it plans to grow at LAX and to build a trans-Pacific hub there."