While price restructuring is a positive step in dealing with soaring healthcare costs, there is ample room for improvement on price supervision, experts and industrial insiders said, after the nation's top pricing regulator unveiled pricing reform guidelines last week.

The guidelines, by the National Development and Reform Commission (NDRC), the top economic planner, restructure healthcare services and the medicinal fees patients are charged, after the State Council emphasized the significance of improving healthcare.

The commission intends to finish the nationwide reform in less than five years. By the end of 2020, pilot programs implemented in 200 cities will be extended to all public hospitals. This will help eliminate their markup revenue from drug prices, a key component in pricing.

Reduced income will be compensated by raising prices for basic healthcare services, but the fees paid by patients are not expected to increase, according to Liu Rui, an official with the healthcare reform office under the State Council.

"Prior to the reform, say, if a patient spent 100 yuan ($15) for treatment at a public hospital, they would have paid 20 yuan themselves while the rest would have been paid by medical insurance. Forty yuan is for service while 60 is for drugs. After the reform is rolled out, the patient still pays 20 yuan - what has changed is the hospital side. The hospital gets 80 yuan from service and only 20 yuan from drugs and that will not increase their income," he explained. "It means the markup from drugs will no longer be a financing channel for hospitals."

The reform is expected to help increase the income of doctors, correct distorted incentives for issuing expensive prescriptions and increase transparency for drug purchases, according to Zhu Dezheng, a senior official with the NDRC's pricing division.

Zhu said the reform would limit negotiation room for public hospitals as many get a large proportion of their profits from issuing expensive prescriptions but paying lower prices to drug distributors.

However, cutting markups is not enough to ensure that patients will benefit from better healthcare services and lower medicine prices.

"When the profits of drug distributors and makers are being further squeezed, more problems are likely to emerge after the reform if regulations are not in place," said Liu Xingwang, marketing director of Lean and Leap Pharmaceutical Co, a distributer based in Guangzhou, Guangdong province.

"Zero markups pose downward price pressure. It makes it harder for small- and medium-sized drug distributors and drug manufacturers to make a profit at a time when the nation is striving to lower healthcare expenses," said Liu.

If they are squeezed, it means some cheap and effective medicine produced by small companies will not be able to reach patients, according to a manager of a Tianjin-based drug distributing company who declined to be named.

"And some drug makers may sacrifice quality," he added.

He worried that institutional gridlock has not been resolved, and that reforms have been watered down.

With the ever-increasing pressure for profits, for both domestic and foreign companies, "there is much to be done to regulate the market", Liu said.

Huang Xinyu, head of the health insurance division with the Ministry of Human Resources and Social Security, admitted that there is still a long way to go to improve pricing.

"Cutting markups is only the first step," said Huang, who expected that more targeted policies will be rolled out in the future to enhance regulations on both hospitals' pricing of service fees and drug purchasing. 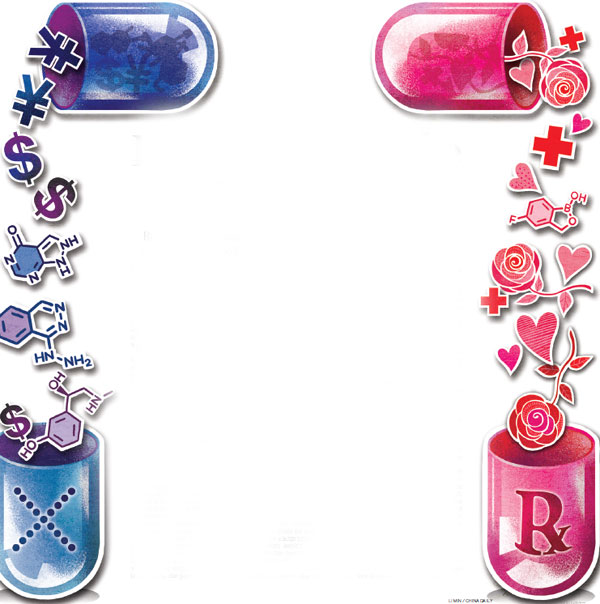