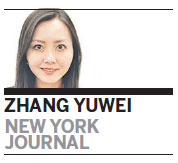 Shoppers from the world's No 2 economy have been climbing the consumer rankings charts recently.

A Standard & Poor's report predicts that China will overtake the US to become the world's No 1 consumer market within the next five years. Not only that, but the number of online buyers is increasing as well.

A new report from Bain & Company said China's e-commerce market is expected to overtake the US' this year to become the world's top online marketplace.

Online shopping has just started to take off in China in recent years. Various online Chinese retailers have been booming with the increasing demand of Chinese consumers. China's e-commerce giant - Hangzhou-based Alibaba Group - predicts that within a decade, online spending could account for nearly half of the country's retail spending.

China's online consumer base is backed by an Internet population of more than 590 million - the world's largest - many of whom are users of smartphones as well. China is also currently the top smartphone user market.

Popular shopping sites - such as Taobao.com and Tmall.com, which are Alibaba affiliates - have gained regular shoppers at home and abroad thanks to online shopping's geographic flexibility.

In the first 11 months of last year, Alibaba topped $157 billion in combined sales through Tmall.com and Taobao.com.

"On the most basic level, the population is just so large at 1.3 billion," said Oscar Yuan, New York-based vice-president at Millward Brown Optimor, a media and branding firm. "The population is well-educated, media and internet savvy, well traveled, and open to ideas and products from other areas of the world."

David Sadigh, CEO of Digital Luxury Group in New York, said China's potential in e-commerce has made many brands - both domestic and foreign - expand online to attract more consumers.

"With several social network platforms reaching more than 300 million Chinese, and who actually spend more and more time online especially through their mobile, it's a must for any serious brand to be proactive there," Sadigh said.

Online shoppers are only one component of China's consumer market. There's also a growing number of affluent middle-class shoppers.

"China's booming middle class will become not only important for China's economy, but will also have a direct impact on many countries and industries," said Sadigh.

China's middle class is expected to triple to 630 million by 2022, up from 230 million in 2012, according to a recent study by the China-US Exchange Foundation.

Those middle-class shoppers have average annual earnings of between $19,500 and $90,000 and are expected to be the driver for the future growth of luxury markets, according to Exane BNP Paribas, an equity research firm.

Chinese consumers' appetite for luxury brands also contributes to the percentage of its growing consumer base in the world.

"For the Chinese consumer, the desire for quality and experience results in an environment ripe for international brands to make inroads with the 1.3 billion consumers," said Yuan.

Even as China's consumers are taking off and helping to reshape the global economy, the country still has the potential to increase its consumption growth, especially during an ongoing slowdown in its economy, whose growth rate currently sits at 7.5 percent.

"China needs greater emphasis on consumption in order to further stimulate the demand side of the growth equation," said Denis Simon, vice-provost for International Strategic Initiatives at Arizona State University.

"It is gradual but firm and extensive reforms that will foster the economic and social basis for robust consumption in China," said Steinbock.

Chinese applicants to US down