Chinese telecommunication giant Huawei Technologies has condemned infiltration into its servers by the US National Security Agency as reported by the New York Times and the German magazine Der Spiegel over the weekend.

The report provided by Edward Snowden, a former NSA contractor who has since last June been revealing NSA's massive global surveillance programs, showed that the NSA has created "back doors" into networks maintained by Huawei.

Charles Ding, president of Huawei North America, said Huawei condemns initiatives to penetrate corporate networks, to monitor corporate emails and to steal proprietary information about their products in order to exploit those products in other networks.

"Like any other telecom company, Huawei is opposed to any action that threatens cyber security and we urge governments, industry and customers of all nations to work together to tackle the global challenge of cyber security," Ding said.

He said Huawei has maintained an excellent record in cyber security. "Like other companies, Huawei has persisted in thwarting outside attacks on our internal networks. We are further improving and strengthening our infrastructure," Ding said.

Huawei, with some 150,000 employees the world over, has its products and solutions being used in more than 170 countries, servicing about a third of the global population.

"The security of our networks and our products is the highest priority for this company," William Plummer, Huawei's vice-president for external affairs, told China Daily on Sunday.

"This is an inflection point for the global technology industry. It's a call for action for all ICT (information and communications technology) leaders to rally around the common cause and that common cause is restoration of confidence in the information society," Plummer said, adding that confidence in networks and the Internet and in the very fabric of the information society is collapsing because of these types of activities.

He said Huawei has publicly communicated its commitment to working with its peers in a private and public partnership to develop standards and best practices in order to raise the security assurance bar and restore confidence in global networks.

"Now is the time for the industry to come together and develop mechanisms and make it harder for these kinds of activities to take place," Plummer said.

Plummer said Huawei is committed to its customers, employees and American company partners from whom Huawei purchased almost one third of its components, totaling 47 billion in 2013.

The Friday meeting did not seem to calm the anger. "While the US government has taken helpful steps to reform its surveillance practices, these are simply not enough," Facebook said in a statement after the meeting."People around the globe deserve to know that their information is secure and Facebook will keep urging the US government to be more transparent about its practices and more protective of civil liberties," the statement said.

Huawei has long been a bogeyman for the US government and lawmakers in their attempt to vilify China as a source of cyber espionage.

In October 2012, a US House Intelligence Committee report advised US companies to avoid doing business with Huawei and ZTE, another telecom giant from China, due to possible national security threats, an allegation unsubstantiated by evidence.

Huawei has dismissed the allegation as groundless. However, its business has been negatively affected over the years due to the fear-mongering in the US.

Zhu Zhiqun, a professor of political science ofBucknell University, saidthe US government likes to paint itself as the victim in cyber spying, especially between the US and China.

"But few people with common sense would doubt that the US intelligence has one of the most sophisticated and aggressive espionage networks around the world," he said."Earlier it was revealed that NSA spied on US allies such as Germany and its leaders. So the latest revelation that NSA spied on Huawei and Chinese leaders should not come as a surprise at all,"

Zhu said the revelation is an embarrassment to those who singled out Huawei as the culprit. "It will be interesting to see how US officials, members of Congress and security experts to defend the extensive US espionage in China and elsewhere," he said.

It is not sure if Chinese President Xi Jinping and US President Barack Obama will touch on this latest development in an on-going issue when they meet on the sidelines of the Third Nuclear Security Summit to be held in The Hague, Netherlands this week.

Cyber security has become a key issue between the US and China following a report in February 2013 by US cyber security firm Mandiant, accusing a Chinese People's Liberation Army (PLA) unit based in Shanghai's Pudong area of engaging in cyber spying against US companies.

After some two months of finger pointing, the two countries agreed last April to set up a cyber security working group. The group held its first meeting during the 5th China-US Strategic and Economic Dialogue held in Washington DC last July. 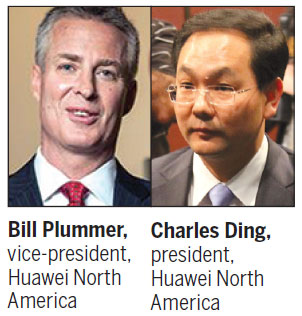 From school dropout to universal appeal