Fight brewing over race in admissions


Change to laws in California could affect minorities

Chinese Americans in California are fighting a proposed constitutional amendment that would reconsider the use of race and gender in deciding which students to admit to state universities, saying it would drastically decrease the number of Asian students.

Chinese communities in the state have initiated online petitions against the measure, including one on the White House website, and the move to take race and ethnicity into consideration for college admission has ignited opposition elsewhere.

Senate Constitutional Amendment 5, or SCA 5, was passed by the state Senate on Jan 30. It would allow public schools such as the University of California (UC) and California State University (CSU) to use race, sex, color, ethnicity, or national origin as a consideration for accepting students.

It would repeal portions of Proposition 209, the 1996 ballot measure that prohibited using race or gender in admission decisions. California was the first state to ban such discrimination "in the operation of public employment, public education or public contracting" through Prop 209.

Democrats in the Senate supported the bill, and it now goes to the Assembly, which also is dominated by Democrats. Republican lawmakers oppose the proposed amendment.

The legislature can put the constitutional amendment before voters without the Governor Jerry Brown’s support. If approved by the Assembly, the measure could go on the ballot in November, but more likely would be put before voters in 2016, to coincide with the next presidential election. 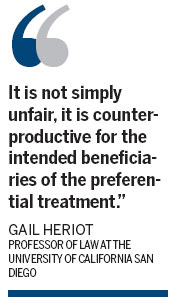 "This bill, the unintended consequence is that it actually allows our public schools to use race and gender and others to discriminate against students," said Republican Senate Minority Leader Bob Huff. "Is that really where we want to go?"

Senator Ed Hernandez, a Los Angeles Democrat and the bill’s author, said, "A blanket prohibition on consideration of race and gender was a mistake in 1996 and we are still suffering the consequences today. "

Hernandez said he wanted more diversity on campuses and said the percentage of minority students in the University of California system has declined at an alarming rate.

Hernandez has written similar bills in the past, including one vetoed by Governor Arnold Schwarzenegger in 2010 and another vetoed by Brown in 2011, saying that while he agreed with the bill's goal, the courts should decide the limits of Proposition 209. This time Hernandez said he proposed the constitutional amendment so the decision on reversing Prop 209 would go to the people instead of the governor.

According to Senator Marty Block, Democrat of San Diego and a co-author of SCA5, if the amendment is passed by voters, higher education institutions could consider race and ethnicity as factors in their admissions processes as long as they were within the narrow parameters tested and set by federal law.

Among the 27 votes that carried the bill through the state Senate, three came from Asian American senators, including Carol Liu, Ted Lieu and Leland Yee.

"The number of eligible students that can go to CSU and UC has been declining since Prop 209 has been implemented," said a spokesman from Liu’s office. "She wants more young people who should go to college to go to college."

Asian Americans admitted to the UC represented 36 percent of the total admissions in the fall 2013. If SCA 5 becomes law, the admission percentage would be based on the percentage of Asian Americans relative to the total state population, which was 13.9 percent in 2012, according to the US Census.

"It is not simply unfair, it is counter-productive for the intended beneficiaries of the preferential treatment," said Gail Heriot, professor of law at the University of California San Diego, one of the major campuses of the UC system. "It is not doing students any favor to admit them to a school where their academic credentials put them so far below the average student's. Many studies now show that, those students are worse off, not better off, in terms of their future careers.’’

One petition, titled California's SCA-5 is against the "equal protection" clause of the 14th Amendment of the US Constitution, was introduced Feb 16 on the White House website. It has attracted close to 20,000 signatures, about 80,000 short of the number needed by March 18 to get a response from the White House.

Another petition addressed to California state Assembly members was started on Feb16 on change.org. By Tuesday it had about 46,000 supporters.

"With such a racially based SCA 5, my dream may not come true no matter how hard I study. Dear California politicians please do not destroy my dream, my future and my ambition to help build this country," Joy Cai, a straight A+ high school student from Corona, California, wrote on the petition’s webpage, saying that UC is one of her dream schools.

Zhang Yang contributed to this story and can be reached at yangzhang@chinadailyusa.com

'Comfort station' to be preserved

Four million have signed up for Obamacare

US firms in China look to services