VW and Chrysler hit with fines for price-fix

FAW-Volkswagen Sales was fined 248.5 million yuan ($40.5 million) by the Hubei Bureau of Price Supervision, which is equivalent to 6 percent of the company's 2013 Audi sales in Hubei.

Seven of its Audi dealers were fined 29.9 million yuan, equivalent to 1 to 2 percent of 2013 sales in the local market.

Meanwhile, Chrysler Group China Sales was fined 31.6 million yuan by the Shanghai government, equivalent to 3 percent of its previous year's sales in Shanghai. Three Chrysler dealers were fined 2.14 million yuan, according to the National Development and Reform Commission (NDRC).

Recent high-profile antitrust cases have sparked concerns among foreign business groups that foreign companies are under "selective and subjective enforcement" of antitrust law.

Xu Kunlin, director of the bureau of price supervision and anti-monopoly at the NDRC, said China's three antitrust regulators have fewer than 100 staff members. 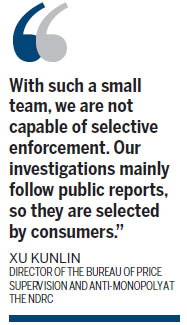 "With such a small team, we are not capable of selective enforcement. Our investigations mainly follow public reports, so they are selected by consumers," said Xu, adding that it does not matter whether the company is foreign-owned.

However, Xu said only one-tenth of the companies involved in NDRC antitrust probes were foreign companies.

The NDRC has reviewed 335 anti-monopoly cases against companies and industrial associations, among which 33 involved foreign-invested companies, he said at a news conference.

Similarly, one-fifth of the companies involved in probes by another antitrust regulator, the State Administration of Industry and Commerce, were foreign companies.

"Investigation in the Qualcomm case has finalized and will soon enter the stage for deciding about the penalty," said Xu.

Zhang Jianping, a senior researcher at the Institute for International Economic Research at the NDRC, said foreign companies are still in an "adjustment period" to a more stringent enforcement of antitrust law as enforcement was somewhat lacking in previous years.

Nicholas Lardy, a senior fellow at the Peterson Institute for International Economics, said he would like to believe that only 10 percent of the companies being investigated were foreign companies. But he said the absence of information and the fact that investigations of foreign companies are immediately in the press can give people the wrong impression.

He called for more transparency, such as releasing the list of all companies, domestic and foreign, being investigated and the results of the probes.

"I wish we had more data, more examples of domestic companies that have been investigated. In economics, we'd say we had asymmetrical information," Lardy said.

But the expert on the Chinese economy said those high-end German carmakers who sell their parts at much higher prices in China than in Germany would be illegal in the United States.

In the US, these companies have to sell their parts at established prices that are transparent to anybody who wants to buy the parts. "So in the US, you can go to a Mercedes dealer and buy parts and fix your car yourself, or you can go to an independent garage, they will go to Mercedes and buy the parts and fix it," Lardy said, adding that in China, consumers cannot do that.

"Based on the standards in the US, we will say the practices of some of these foreign car companies are anti-competitive," Lardy said. But he is also aware of those foreign companies' counter-argument about their concerns over the possible counterfeit parts in China.

"So it's a little ambiguous," Lardy said.

Li Fangfang contributed to this story.

US teachers visit China on fellowship

US tourist in DPRK gets 6 years of hard labor