Chinese and US venture capital experts and businessmen networked during a US-China Venture Capital summit in Palo Alto, California on Friday.

"The goal for us, especially for the Chinese venture capital firms which have an interest in doing US dollar-based offshore investment, in coming here today is to learn about the experiences of our counterparts in Silicon Valley, said Liu Weiping, vice-president of Infotech Ventures.

All together, these 12 firms manage more than $10 billion in investments and have already invested in thousands of small- and medium-sized companies in China, said Liu.

"We need to communicate with venture capital experts in Silicon Valley, since venture capital investment started very late in China and only has a 20-year history," Liu told China Daily.

Fortunately, the Chinese government takes entrepreneurial ventures seriously and provides lots of support to venture capital firms which invest in the realms of high-tech, cloud computing and modern information technology.

"Forty-four percent of the revenue of US investment banks comes from Chinese technology companies, which is a huge deal," Huang said. 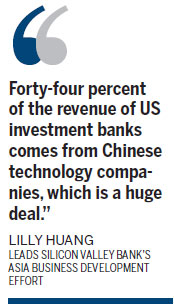 It is very important for these Chinese venture capital firms to come here to learn more about the ecosystem in Silicon Valley so as to lay a foundation for their future investment in the US, especially after Alibaba's huge success on the world stage, said Tung.

The Alibaba IPO served as a "the Chinese are coming" wake-up call to the rest of the world, said Tung.

From Tung's perspective, American investors and venture capitals were shocked by the size of Alibaba group and its market capitalization.

In 2005, when the number of Internet users worldwide was 1 billion, the valuation of Google, No 1 in US, was 20 times that of Baidu, No 1 in China.

However, at end of this year, the world is likely to have 3 billion Internet users and the valuation of Google, No 1 in US, is only two times that of Alibaba, No 1 in China.

"If we look ahead over next 10 years, most of the next one to two billon new Internet users will also come from developing countries, which will generate a huge market in China", said Tung. By his estimation, virtual items, such as online gaming, will be suited for these new Internet users.

Also, "the leading Chinese Internet companies will generate a lot more of their revenue outside of China in the future, led by pioneers such as Alibaba, Jingdong and Xiaomi," said Tung.

Indeed, there will be great profit potential for Chinese funds to commercialize and distribute the newest US technologies and innovation in China since China has the largest Internet market now, said Huang.

"However, in practice it is not that easy for Chinese venture capital firms to break into the ecosystem in Silicon Valley," said Huang.

Not every company is as well known as Alibaba. The largest challenge for Chinese venture capital firms to invest their money in the US is that they need to take time to demonstrate and establish their credibility, said Huang.

"Chinese venture capital firms should find their niche in the US market and have to be very clear about what their strengths and weakness are," said Huang.

US firms remain optimistic about China