Despite the International Monetary Fund's (IMF) downward revision of its growth rate forecast for China, a panel of economic experts still believes the world's second-largest economy is ripe for trade with the US.

On Tuesday the IMF released its October 2014 World Economic Outlook report, which estimates that the growth of the Chinese economy will slow to 7.4 percent in the fourth quarter of 2014 and 7.1 percent in 2015 as it "makes the transition to a more sustainable path".

China's economy has worked to recover from a poor start in 2014 and the Chinese government has indicated it is prepared to accept slower growth as it tries to wean the economy away from a dependence on investment and exports.

"It can seem like this is not the time to get involved in China, but lower growth does not mean we're talking about a bad outlook," Dan Rosen, a founding partner at the Rhodium Group, a global research firm, said during a panel discussion at Discover Global Markets: Greater China Business Forum on Tuesday in New York.

"China for 35 years now has had a very consistent powerful trend in its economic growth, and we have never seen such a big economy develop so quickly for so long," Rosen said. 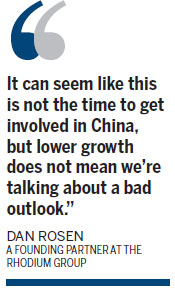 "But we are now entering the long talk about transition from past growth to a new era," he said. "What China is doing today is actually laying the groundwork for what will be the best possible outlook for China over the next seven years or so. Come 2020, I foresee a China that's still growing about 6 percent a year in GDP terms."

Craig Allen, deputy assistant secretary of Asia at the US Department of Commerce, said: "There's a great deal of growth between [the US and China] pretty much across the board - automotive, aviation, etc. While the US exports more to Canada and Mexico, China is by far our largest overseas trade market."

In 2013, US goods exports to China were $122 billion, according to data from the US government. And on top of that, Allen said the US had $46 billion worth of service industry exports.

"With growth, trade with China should surpass US exports to Europe within two or three years, which is quite a remarkable tectonic shift," he said.

Allen and Rosen joined Jeremie Waterman, executive director for greater China at the US Chamber of Commerce, and Alfred Nader, vice-president of corporate strategy and development for Western Union, for a dialogue on the trends facing China, including growth prospects, the benefits of carrying trade in the yuan and China's import and export markets.

More than 100 people were in attendance for the discussion on Tuesday in New York, which kicked off the 2014 Discover Global Markets Greater China Business Forum.

During the panel, Jeremie Waterman, of the US Chamber of Commerce, said: "The Chinese economy has slowed and some of the regulatory operating concerns that were overlooked in past years have now become more important considerations. As companies look to make future investments in China against other opportunities globally, due diligence is key. If you're going to go to the China market, it is not for the risk averse."

Foreign direct investment (FDI) into the Chinese mainland dropped 14 percent in August from a year earlier, settling at $7.2 billion, the Ministry of Commerce (MOC) said on Sept 16.

The data, following a 17 percent slump in July, marked the lowest volume in nearly five years. It is a sign that investors are growing more cautious over the softening strength of the world's second-largest economy.

Alfred Nader, a vice-president with Western Union, said: "Up until a few years ago, 99 percent of all payments coming to and from China were done in the US dollar. But starting in 2009, China started to liberalize the currency, and American businesses are now at a very special moment in time where they can use regulations to their benefit."