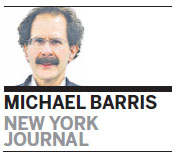 Sometimes it's not enough for money to talk. It has to cut through a cacophonic, complicated din.

Take the recent rebalancing of world growth, for instance. "Just as economists have begun lowering their forecasts for China and other developing economies, the American economy is bouncing back." So went the promotional blurb for an economic forum co-presented last week by the Americas Society/Council of the Americas and China Business News.

"Japan appears to have turned a corner and is ending almost two decades of deflation," the item posted on the AS/COA website said. "Economic data out of Europe suggest the crisis is finally coming to an end. What is the future direction of the world economy? How will emerging markets deal with slowing growth and the current investment outflow?"

The value to both China and the US of sorting out the complexity can't be overstated. China is at least a $300 billion market for US companies and US workers, according to the US-China Business Council. What's more, US exports to China, including manufactured goods, chemicals, electronics, and agriculture products, consistently top $110 billion annually.

With so much money on the table in a shifting economic landscape, what will be the key US-China business issue in the months, or even years, ahead?

Issac Souede, chairman and CEO of the Permal Group, a speaker at the AS/COA symposium, said on the sidelines of the forum the future depends on the US and China establishing "trust and confidence on both sides".

"It's a G-2 world in terms of what's good for the world today," Souede told China Daily. "You've got a $17 trillion economy and a $10 trillion economy. The next size is $5 trillion. Even when you look at powerful Germany, it's only $3.4 trillion.

"So (the key issue) is trust and confidence and finding places of cooperation, as opposed to confrontation. It's really about finding a means of cooperation that is synergistic to both."

"Vice versa, when you look at what China has to do in a healthcare space. America is way ahead of the curve," the executive said. "And China is looking for American help with fracking. We are the world leaders in fracking by a country mile. China could well benefit from US technology."

A trusting, cooperative relationship is reachable, Souede said. "You keep getting a little bit better and you keep trying to get better. Slowly it surely is going to get there. It's got to be a win-win."

Charles Himmelberg, Goldman Sachs' head of global credit strategy and another forum panelist, said "getting growth back on track for both economies" is the main problem. "Trade flows between the two economies obviously depend on organic strength and growth," he said. "The US and China think to their own drumbeats much more so than the US and Europe. The US and Europe are tightly linked. China has more of its own economic heartbeat, so to speak."

USCBC President John Frisbie has said that both the US and China "need to be involved in order to fully develop commercial ties, tackle unresolved issues, and bring greater benefit to each country's economy, companies, employees, farmers, and consumers." Doing so will require "continued high-level engagement on both sides. It is a relationship that only gets bigger and more complex as we move forward."

The US has much to gain from the global emergence of Chinese companies, including employment generation and tax revenue, according to Joel Backaler, a director of the Frontier Advisory Group, a research, strategy and investment advisory firm that helps clients improve competitiveness in emerging market economies.

Chinese companies in 2013 accounted for more than 70,000 US jobs, an eightfold increase from 2007, owing in part to Shuanghui International's $4.7 billion acquisition of US pork producer Smithfield Foods, according to the Rhodium Group consulting firm.

"It requires a lot of hard work and is often frustrating. But it is worth the effort."

Beijing among 'most global' cities

Foreign investment laws will be revised

Robotic submarine to search for jet