For 29-year-old Beijing native Jia Xiaomeng, passing through that finish line in the Monday Boston marathon was a dream come true. That dream began to take shape a year ago when she was just 500 meters from the finish line and the deadly bombings happened.

The horrendous attack last April claimed three young lives, including a female Chinese student from Boston University, maimed dozens, caused people pain by taking their loved ones and at the same time sent out a strong call for unity among the local and international community to come back this year to help make "Boston Strong".

Jia, together with another 24 Chinese runners representing the Vanke team, wanted to show their defiance to the horrific bombing attack by returning to the event this year.

"I made up my mind on the spot when the bombing happened," Jia recalled after she finished Monday's race. "I was so close to the bombing scene, yet I felt no fear but I wanted to do something to show my support." 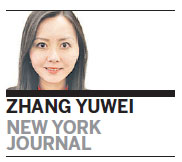 Shenzhen-based Vanke is China's largest residential real estate developer. As an official sponsor of the Boston Marathon, it brought 15 runners, led by the company's founder and chairman Wang Shi, to the race last year.

Besides Jia and four other Vanke employees who were return runners, the Vanke team included some of their clients and investors - amateur runners who wanted to be part of the support network for Boston.

"The spirit I saw from the fellow runners and spectators was an amazing part of this experience," said Mao, who crossed the finish line holding a Chinese flag.

"Along the way, I felt support, 'Boston Strong', unity and a very positive attitude toward life coming from the crowd, from this amazing city that cannot be defeated," Mao said.

The Boston Marathon was a very different experience for Mao and his teammates - one year after the twin bombings claimed three lives, including a Chinese and wounded more than 260 people.

In Cambridge, a city south of Boston, 26-year-old Luis Vasquez, watched the marathon closely. Last year's bombing attack had a personal connection to Vasquez as he lived in the same neighborhood with the two brothers, Dzhokhar andTamerlan Tsarnaev, the marathon bombers, and attended high school with them.

Vasquez was one of the most quoted sources by local and national media after the bombing terrorists' names were announced.

For the past year, Vasquez found it difficult to watch or read anything about the investigation of the bombers in the media.

Vasquez said there is an unwritten rule now in Boston, Cambridge and Watertown, where the surviving bomber was captured. "We don't talk about or mention their names and that's why we are able to heal," he said.

"We have to be strong and continue to hold hands and just look forward at what we've been doing," he said. "At the end of the day, it's all noise, all noise."

"It's significant to 'Boston strong' and to how we heal as a city," said Vasquez. "Crossing the finish line is so much more meaningful now."

This year's event drew some 36,000 runners from all over the world. Among them, seven members of Boston University ran the 26.2 mile marathon in honor of one of the bombing victims Lu Lingzi, the BU graduate student. The "Lingzi team" was made up of Chinese and American students as well as school faculty, none of whom knew Lu personally.

"We want to show support and we run as one, you know," Mao said of his fellow runners for Lu.

"It's not about the last, or the first in the race, it is about togetherness and the unity," said Vasquez.

"Evil cannot keep anyone down, that's pretty much the lesson learned," Vasquez said.