The Map is one of Tan Dun's most famous pieces, and Michael Harrington, executive director of the Skirball Performance Center, said that Tan is someone who takes traditional Chinese culture and incorporates it with the contemporary, which makes The Map a good song to end the Visions + Voices: China series.

"We wanted to feature work from Tan Dun since he's Tan Dun, arguably one of the greatest living composers in the world, and definitely from China. The whole series has been this mash-up of traditional Chinese culture, or traditional Chinese beliefs and thoughts viewed through a contemporary lens, and I think Tan Dun's work embodies that perfectly," Harrington said.

The Visions + Voices: China program began in February and featured the Tao Dance Theater, the Hangzhou Yue Opera Company, and the National Theatre of China.

"What I think is interesting about [The Map] is we've built up an amazing buzz about the series as we've been going along. So to culminate tonight with this really special work, I'm optimistic that we'll have a strong attendance," he told China Daily before the performance. 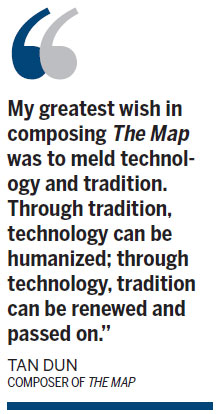 Changsha-born Tan is most known for his work for movies like Crouching Tiger, Hidden Dragon and Hero, as well as composing music for the medal ceremonies for the 2008 Beijing Olympics. The Map, commissioned by the Boston Symphony Orchestra and famous cellist Yo-Yo Ma, premiered in 2002. Tan found inspiration for the piece when he returned to his home province of Hunan and collected folk songs sung by the local villagers. The performance of the piece combines video recordings with antiphonal singing and percussive beats.

"My greatest wish in composing The Map was to meld technology and tradition. Through tradition, technology can be humanized; through technology, tradition can be renewed and passed on," Tan has said about The Map. "Today, ancient cultural traditions vanish everyday, everywhere. If artists embrace the past and the future with their hearts, miracles will arrive."

The Visions + Voices program this year spotlighted China because the Skirball Center wanted to coordinate with the opening of NYU's Shanghai campus last year, but this year also marks the 35th anniversary of the normalization of US and China's relationship, which Harrington said made for a good coincidence.

The most popular show with the NYU student community in the series was the National Theatre of China's Chinese rendition of Richard III, with more than 50 percent of the tickets sold to NYU students.

"I think that says a lot about what it is we're trying to do, but also to the appeal of the piece in general," Harrington said. "I thought [Richard III] was an incredible blend of Shakespeare's story mixed with really beautiful traditional Chinese theatrical elements."

Skirball will focus on Germany for next year's Visions + Voices but Harrington said that if there is great work coming out of China, the performance center will find a way to share it with the New York community.

"I'm really proud of [the series] this year and I think it's been really well-received. We've gotten tremendously good feedback from the university community, from the Chinese American community, and from the general New York City cultural consumer," he said.

Li: More common interests with US

China warns US over sea issue