China outraged over US charges

The US Justice Department's announcement of the indictment of five Chinese military officers on charges of cyber theft has continued to trigger strong reactions from Beijing.

Following an immediate statement by China's Foreign Ministry spokesman Qin Gang on Monday, China summoned US Ambassador to China Max Baucus and the acting US military attach in Beijing to lodge a complaint.

In Washington, Chinese Ambassador to the US Cui Tiankai made a solemn representation with officials at the US State Department on Monday.

On Tuesday, Defense Ministry spokesman Geng Yansheng also voiced China's strong opposition to the indictment and called the US to withdraw it.

"The Chinese government, the Chinese military and their relevant personnel have never engaged or participated in cyber theft of trade secrets," Geng said. "The US accusation against Chinese personnel is groundless and has ulterior motives."

US Attorney General Eric Holder on Monday accused five Chinese military officers of engaging in cyber theft by hacking into the networks of US companies' including Westinghouse, Alcoa, US Steel, Allegheny Technologies, the United Steel Workers Union and SolarWorld.

Without naming the names such as the National Security Agency, Geng said relevant US institutions have long been involved in large-scale and organized cyber theft as well as wiretapping and surveillance activities against foreign political leaders, companies and individuals.

He accused the US side of adopting double standards on cyber security and claimed the Chinese military is a victim of cyber theft.

The terminals of Chinese military access to the internet have suffered from great number of foreign cyber attacks in recent years and a considerable number of such attacks originated from the US, according to Geng. 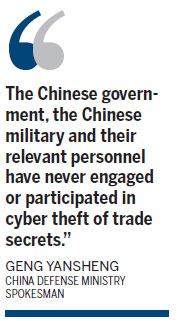 The spokesman said China-US military relations have been developing well recently, but the US move has seriously damaged mutual trust and breached its commitment to building a healthy, steady and reliable military relationship.

"The US side must show its sincerity and take concrete actions to promote the healthy and steady development of the relations between the two countries and their military forces," Geng said.

The Justice Department announcement came just a few days after General Fang Fenghui, chief of the General Staff of China's People's Liberation Army, wrapped up a five-day visit to the US, at the invitation of General Martin Dempsey, chairman of the Joint Chiefs of Staff.

On Monday, China announced it would suspend a joint working group on cyber security set up last year because "the US is not interested" in solving the issue through dialogue.

On Tuesday, China said it would prohibit the use of Windows 8 operating systems in new government computers to ensure security following the shutdown of Windows XP.

"It's really amazing to see that some people still believe they have the moral high ground and credibility to accuse others, if we consider the Snowden revelations, and so on and so forth," Chinese Ambassador Cui said in an interview with CNN aired on Tuesday.

Leaks by former US National Security Agency contractor Edward Snowden showed that the NSA had engaged in widespread hacking of Chinese government and military entities and also companies and universities in the country.

Cui asked the US to explain its cyber attacks on Chinese companies, universities and even individuals. "Is that for national defense? Or is that for other purposes?"

He said China also had a long list of well-known Chinese companies that have been attacked by such activities, originating from the US. "So I think it would be constructive and practical for the two governments to work together on these issues, to address these issues together, not to exchange accusations like this," Cui said.

The ambassador said the US' unilateral action has undermined the very basis of the joint cyber working group. "I don't know why the US made such a decision," he said.

The current spat is likely to have a negative impact on the upcoming 6th session of the China-US Strategic and Economic Dialogue (S&ED) that was recently announced to be held in Beijing in July. US Secretary of State John Kerry and Treasury Secretary Jack Lew will head the US delegation while the Chinese side will be led by Vice-Premier Wang Yang and State Councilor Yang Jiechi.

In his testimony before the Subcommittee on Asia and the Pacific of the US House Committee on Foreign Affairs, Daniel Russel, assistant secretary for East Asian and Pacific affairs, said the indictment against members of the Chinese military reflects not a response to China's foreign policy activities, but the strong commitment by President Obama in focusing on cyber security and cyber crime to address the challenge posed by Chinese government sponsored, cyber enabled theft of trade secrets and sensitive business information.

"Snowden's revelations have disqualified the US from making allegations against others on cyber security," said Fan Jishe, a US studies researcher at the Chinese Academy of Social Sciences.

He said Beijing would deliver a tit-for-tat response to any follow-up measures taken by Washington.

Li Qinggong, deputy secretary-general of the China Council for National Security Policy Studies, said the information the US released about the Chinese officers "cannot prove anything".

Chinese national to be sentenced