One Year after Sunnylands: Assessing the US-China Relationship

Nearly a year after the historic summit between Chinese President Xi Jinping and US President Barack Obama at Sunnylands, California, experts are trying to figure out a way to advance the bilateral relationship that has been overshadowed lately by negative headlines on tensions and conflicts.

Paul Haenle, director of the Carnegie-Tsinghua Center based in Beijing, expressed his concern that the problems in the relationship are beginning to define the relationship.

"There is not enough good (things) to talk about. I think leaders at the highest level, in China and the United States, need to begin to address that," he told a seminar entitled One Year after Sunnylands: Assessing the US-China Relationship held at the Carnegie Endowment for International Peace in Washington on Wednesday.

Haenle believes the leaders need to figure out how to move forward the concept of a new type of major power relationship and how the two countries are going to enhance cooperation in areas where they have common interests.

"We haven't really done that yet," he said.

Yan Xuetong, dean at Tsinghua University's Institute of Modern International Relations, agreed that there have been setbacks in the last few months in terms of moving towards the Sunnylands vision.

But Yan thought it normal because both sides still don't have experience in the new type of relationship between a rising power and an existing one.

While saying it was going to be a difficult endeavor, Yan believes that it's important that both leaders have realized this new type of relationship will help prevent confrontation.

Yan said the upcoming China-US Strategic and Economic Dialogue to be held in Beijing in July will provide a new opportunity for the two sides to sit down and discuss how to take concrete steps. 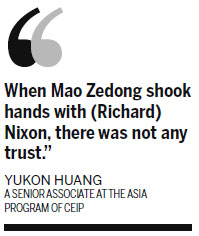 Some in the US-China relations circle have worried that the US indictment of five officers of China's People's Liberation Army for cyber theft a week ago and the subsequent strong reaction from China will hurt the mood for cooperation before the important bilateral meeting, which will be headed by Secretary of State John Kerry and Secretary of Treasury Jack Lew on the US side and Vice-Premier Wang Yang and State Councilor Yang Jiechi on the Chinese side.

Haenle believes that despite the differences and tensions between China and the US, it's important for both leaders to put as much energy as possible into figuring out how to move forward on a positive agenda.

He mentioned his undergraduate students at Tsinghua University who proposed the two countries focus together on eradicating childhood diseases or a joint mission to Mars as part of effort to put the relationship on a positive track.

Haenle reminded people to also look at the US-China relationship in the context of their 35 years of diplomatic ties.

"So if you look at that context, the trajectory of the relationship has been on an upward curve," he said.

He admitted it won't be an easy job for China and many other countries to accept the US' stance on cyber security.

Yan believes it is not a bilateral issue, but a global issue and he called for the establishment of multilateral regulations.

He said because of the excessive capacity the US has in cyber space, the US should take the lead in this regard.

Yan dismissed Western accusations of a China threat, saying that China has not been involved in any war since the early 1980s. But he believes that many in the US and the West will keep talking about a China threat as long as China does not become a member of the Western club.

"It's not how China behaves, it's whether China joins this Western club or not," Yan said.

Yukon Huang, a senior associate at the Asia Program of CEIP, expressed his concerns over the bilateral economic relationship that he described as "underdeveloped, unbalanced, and politically fragile".

He also expressed concerns about two regional free trade agreements that have been excluding one another. One is the US-led Trans Pacific Partnership, which is led by the US and in which China does not participate. The other is the Regional Comprehensive Economic Partnership led by the Association of Southeast Asian Nations and joined by China but not by the US.

While many are surprised to find the lack of trust between China and the US, Yan believes trust is not really necessary for cooperation given that the US and the Soviet Union cooperated without any trust during the Cold War. "When Mao Zedong shook hands with (Richard) Nixon, there was not any trust," he said.

He said both sides need a common definition of the new type of relationship, even without trust.