The China Institute will hold its annual gala today, celebrating the 88th year since its founding in 1926 and making it the oldest US-China cultural organization in the United States.

It will gives its Blue Cloud Award for contributions to the cultural exchange between the US and China to I.M. Pei, architect; Chien Chung Pei, son of I.M. Pei and also an architect; Michelle Kwan, US public diplomacy envoy and former Olympic figure skating medalist; Feng Lun, chairman of Vantone Holdings; and Shen Wei, director and choreographer of the 2008 Beijing Olympic ceremonies.

I.M. Pei designed the Louvre Pyramid that sits in the main courtyard of the Louvre Palace, as well as the Muse d'Art Moderne Grand-Duc Jean, a museum of modern art in Luxembourg.

Michelle Kwan won silver and bronze medals in the 1998 and 2002 Olympics, respectively, and is a senior adviser to the US State Department as well as a sports analyst for Fox Sports.

Feng Lun is a real estate tycoon in China and is also chairman of China Center, which was the first tenant to sign a lease for the new One World Trade Center in New York.

Past recipients of the Blue Cloud Award include playwright David Henry Hwang and the Lang Lang International Music Foundation. The gala will be held at Gotham Hall in midtown Manhattan.

"We are the oldest cultural organization in the US that has been promoting the two countries' relationships since 1926," Willow Hai, gallery director at the China Institute, told China Daily.

"And the gala is very important for the institute. Every year this gala lets the world know we keep doing our mission, and it is also through these galas that we raise funds to support the institution and keep it running." 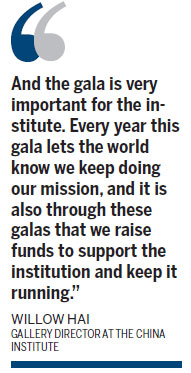 The China Institute in Manhattan was established by American and Chinese educators, including John Dewey, Hu Shih, president of Peking University and China's ambassador to the US, and Kuo Pingwen, founder of the National Southeastern University in China.

The institute offers programs in education, arts and culture, literature, and language. It also has an art gallery that showcases Chinese art. More than 100 exhibitions in calligraphy, painting, and ceramics have been held at the gallery since its establishment in 1966.

Two paintings on exhibit at the China Institute Gallery will be auctioned during the gala, Hai said. The exhibit, Inspired by Dunhuang: Re-creation in Contemporary Chinese Art, opened in December and runs through June. The paintings to be auctioned are by Chinese artists Emily Cheng and Yu Hong.

Hai said that the China Institute Gallery is one of the biggest draws for the institute, attracting more than 10,000 viewers to exhibits.

"I think we really did a lot to cultivate US-China relations through our gallery," she said. "We use art exhibitions as the bridge.

All the artwork showcased originated from China, and through the newly excavated archaeological material and research in the field, we're able to give American audience first-hand experience to see those artworks."

US has to dump containment fantasy

US soldier freed from Taliban