Giving it away in China

How philanthropic are China's new billionaires and millionaires? Experts in the world of giving say the potential is there, but the motivation and mechanisms for giving may not be, reports Jack Freifelder from New York.

The number of millionaires in China grew to 2.4 million last year, second only to the United States, which totaled 7.1 million, according to the Boston Consulting Group (BCG).

The number of billionaires is upward of 300, according to the 2013 China Rich List put out by the Hurun Report, a leading authority on China's high net-worth individuals. And the most recent compilation of Forbes World's Billionaires List includes more than 130 Chinese individuals with net worth that exceeds nine digits.

How giving are these rich?

China ranked 133 among 135 countries for donating money and last for volunteering, according to the World Giving Index 2013, an annual survey by the Charities Aid Foundation, a non-governmental organization (NGO).

Total charitable giving in China was just 4 percent of the US level in 2013, according to Shanghai-based Hurun.

In 2013, China's top 100 philanthropists gave away a total of $890 million - about $100 million less than the $992.2 million that Facebook CEO and co-founder Mark Zuckerberg and his wife donated that year.

According to the Giving USA Federation's most recent data, foundations gave $48.96 billion (up 5.7 percent), and corporate giving accounted for just 5 percent of the total, or $17.88 billion (down 1.9 percent), down primarily because of the slow growth in corporate pre-tax profits.

Unlike China where individual wealth has occurred in the last decade or so, the accumulation of wealth in the US by individuals has a much longer history, going back to such entrepreneurs as John D. Rockefeller Sr and Andrew Carnegie in the early 1900s. Today's most notable US philanthropists are Microsoft Corp founder Bill Gates and business magnate and investor Warren Buffett.

The long history of philanthropy by Americans is also because the US offers its citizens - and corporations - who give to charities some of the world's most generous tax incentives. If the extremely wealthy do not give away some portion of their income or put it in some type of tax shelter, it goes to the tax collector.

"The potential is there in China as a result of the growth in the country's number of millionaires and billionaires," said Yanzhong Huang, a senior fellow for global health at the New York-based Council on Foreign Relations (CFR). "But we have to keep in mind that just having the capability to donate does not mean there's an incentive. Motivation could be provided by the government or in the form of taxation benefits, but there's not much there."

Some individuals like billionaire real estate developer Xu Jiayin serve as examples of that potential.

Xu, chairman of the Evergrande Real Estate Group, gave $68 million to charity in 2013, making him the biggest philanthropist in China, according to Forbes 2013 China Philanthropy List.

In August, Ma's Alibaba is expected to launch its IPO, the value of which may hit at least $120 billion, according to market observers.

The Wall Street Journal reported in April that Alibaba is setting up "one of Asia's largest philanthropic trusts". The fund will be backed by stock options that represent about 2 percent of the company's current value, and would focus on areas like health care, education and the environment, Ma told the newspaper.

Alibaba's trust is "by far the largest endowment of its kind in China," and it could even rival the one named after Hong Kong billionaire Li Ka-shing, chairman of Hutchison Whampoa Limited, a Hong Kong-based multinational conglomerate, the Journal reported. 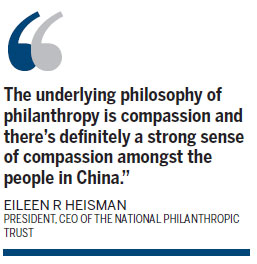 The 86-year-old Li is the richest man in Asia, occupying the 11th spot with a worth of $36 billion, according to the latest Forbes annual list of global billionaires.

Over the past four decades, the Li Ka Shing Foundation (LKSF) has raised more than $1.8 billion, almost 90 percent in support of education reform initiatives and medical services in the Greater China region.

His foundation's main goals are to promote positive and sustainable education reform, support research and development in the healthcare field, and encourage and help instill a modern culture of philanthropy in China.

In 2006, Li said that traditional Asian values "encourage and even demand that wealth and means pass through lineage," but he said it was his hope that his foundation could help persuade people in Asia to "transcend this traditional belief".

But because there is no inheritance tax in China, some entrepreneurs are not shy about keeping their money within their immediate families, said Dien S Yuen, managing director of Kordant Philanthropy Advisors, a San Francisco-based global philanthropy research and advisory firm.

"China is in what I call the 'accumulation of wealth stage,' and they are still building their businesses and growing, which I think is one of the reasons you're not seeing an outburst of philanthropy," Yuen said in an interview with China Daily.

Yuen said she expects philanthropy in China will grow to be more standardized in the future, but without an "enabling environment" to foster the proper infrastructure, she said individuals will continue to abstain from giving because of the attention and potential backlash that goes hand-in-hand with high profile philanthropy.

"After you've made all this money as a businessman, you're expected to give back and help the people who moved you to this position," Yuen said. "So the tricky part or one of the bigger issues is how much do you give?

"A lot of people have been giving and I think they're just very private about it, almost anonymous," she said. "And they take extra precautions in being anonymous probably because they don't want the public shame of 'you're worth $100 billion, so why did you only give $1 billion?' There's really never a magic number."

Whether there is a growing culture of Chinese philanthropy and if so, how it will take shape going forward was the topic of discussion in June among experts on foreign philanthropy at the Asia Society in New York.

Melissa Berman, president and CEO of Rockefeller Philanthropy Advisors Inc (RPA), said at the event that the "robust non-profit sector" in the US has allowed citizens to develop trust in philanthropic organizations, a sentiment that she said has not yet emerged in China.

Berman said that within the last decade legislation from the Chinese government has helped encourage the formation of private foundations. "That helps give [these organizations] legitimacy and will help build the infrastructure of trust in nonprofits, which will increase confidence in the whole idea of philanthropy," she said.

"Private foundations have been permissible for 10 years now and private philanthropy has been growing rapidly since the 2008 earthquake in Sichuan," she said.

Eileen R Heisman, president and CEO of the National Philanthropic Trust (NPT), wrote in a September 2013 article for Nonprofit Quarterly that "a watershed moment" in the philanthropic awareness among Chinese was in 2008 when close to 80,000 people were killed in the Sichuan earthquake.

In that year, annual donation totals in China reached nearly $16 billion - three times more than the previous year, and individual donations in China accounted for 54 percent of the total in 2008.

"Philanthropy can be very contagious in different ways," Heisman said in an interview with China Daily. "The underlying philosophy of philanthropy is compassion and there's definitely a strong sense of compassion among the people in China."

Heisman said that China's main focus for philanthropy is human services, like health and welfare issues, and it "could take some time" before any evolution in the trends.

"There are some tax incentives for charitable giving in China but they are not as well developed as in the US," said Mary Brown Bullock, chairman of the China Medical Board (CMB), who took part the panel discussions at the Asia Society. "That's something that will evolve over time, and it will be fascinating to watch how an increasingly affluent society begins to set up the institutions and structure for philanthropy."

CMB was started in 1914 and was endowed by Rockefeller as an independent American foundation to advance health in China and Asia by strengthening medical education, research and policies.

Yuen, with Kordant Philanthropy, said the due diligence required from people looking to give to charity in China is also a bit of a deterrent in the overall trend of Chinese philanthropy.

"If you want to give in the US, you can go online, send a check, so it's very easy," Yuen said. "In China, if you want to have a tax deduction for your gift, you have to check and make sure the nonprofit you worked with is registered so you can get that tax deduction."

"The US is such a hospitable place for philanthropy that some Chinese are setting up their philanthropy here," she said. "There's much more of an incentive in the US for taxes, and a lot of these individuals understand this."

Heisman said despite challenges like modest tax incentives for philanthropists and transparency issues for nonprofits and NGOs alike, China's nonprofit sector is growing. But philanthropists in China will have to find a better way to encourage potential donors going forward, she said.

A February report on China from the Council on Foundations, a philanthropy advocacy group, said: "Recent changes in tax legislation have increased the portion of taxable income that individuals (30 percent) and enterprises (12 percent) can deduct for public benefit donations to qualifying nonprofits."

Huang with the CFR said in a May 30 post on the CFR's Asia Unbound blog that middling growth in China's philanthropic sector stems from a lack of transparency and accountability. But people in China are already asking for change in these areas, he wrote.

"The Third Plenary session of the 18th CPC Central Committee already sent a signal, saying that the government is going to encourage and promote social organizations - the terms used to refer to the non-governmental organizations," Huang said in an interview with China Daily. "They are also going to simplify the registration and approval of the social organizations. These are all positive developments."

What is the future of philanthropy in China?

"The rapid rise of social media and the advent of online giving have empowered new donors and grantees alike," wrote Emily Weaver on the Asia Foundation's website in April. Weaver served as program adviser for the foundation in China from September 2012 through March 2014.

Weaver noted that during the Lushan earthquake in April 2013 many donors turned to online platforms for giving and that more than $48 million was raised in just 10 days, according to the China Online Donations Report.

Heisman also highlighted the growth of social media in giving in China.

"This is my prediction," she wrote in a September 2013 article for the Non-profit Quarterly. "Chinese philanthropy will leapfrog over American philanthropy. They will seize social media and new technologies because US-based techniques, like direct mail and checks, won't be part of their 'old guard' or existing infrastructure."

"I, for one, will not be surprised when the day comes that we look to China's non-profit organizations' achievements and wonder, "How'd they do that?"