The Futures Company, a consulting subsidiary of advertising giant WPP, is opening its first office in China, expanding in the country as the middle class in the world's second-biggest economy continues to grow.

The company opened its first Asia office in Singapore last year and will be expanding its Asia-Pacific business through its new Shanghai outpost, which has already begun operating.

The Shanghai office will be led by Kunal Sinha, formerly of advertising and marketing firm Ogilvy and Mathers, where he was chief knowledge officer for China and cultural insights director for the Asia Pacific, according to Futures. The China office will work closely with the Singapore office to develop business in the region, the company said.

"We are delighted to be opening an office in China to support the continued growth of our business in Asia-Pacific. We have been working with clients in China for a number of years from our Singapore and global offices," said Will Galgey, global CEO of The Futures Company, in a statement. "We'll now be able to better support those clients and develop new client relationships through Kunal and the outstanding team he has assembled." 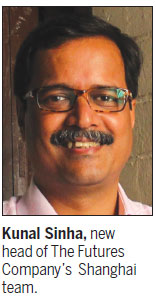 Sinha told China Daily that he will be leading a team of four, but expects the team size to increase to accommodate business growth. The company will be working across several sectors like healthcare and the packaged foods industry.

"In healthcare, we're helping our clients respond strategically to the new environment, where added scrutiny and new forms of communication are creating challenges," Sinha said. "We're working in the packaged foods industry, and consumer products, where there is intense competition, greater consumer concern and uncertainty in the supply chain."

The timing of the expansion into China is "absolutely right", Sinha said, adding that competition within the country has intensified as growth has slowed and "power has shifted to the consumer".

Companies are receiving greater scrutiny from people and the government alike, but despite that, China is still growing faster than most markets and clients need cultural expertise, he said.

"For many of our existing and prospective clients, China is already - or close to being - the world's largest market for automobiles, luxury, meat, mobile phones, outbound travel. Local businesses have grown and become leaders in several market segments: technology, finance, and natural resources," he said.

"Looking at our growth trajectory, we'd be ignoring China at our own peril. But our ability to help businesses spot opportunity and embrace it, even in challenging times, makes our offer compelling to clients, which is why our initial conversations, in just over a month, have been extremely promising," Sinha said.

The Futures Company's expansion comes as foreign multinationals are opening offices in China in droves, trying to capitalize on China's growing consumer base. Social media giant Facebook has reportedly leased space in downtown Beijing to open a China office, despite its service being banned in China, Bloomberg reported last month. US jetmaker Gulfstream opened its first office in China in 2011.