US Secretary of State John Kerry, who has been embroiled by the recent escalating violence in the Middle East, tried hard on Wednesday to reassure that the United States is still committed to its rebalance to Asia policy first launched by President Barack Obama in 2009.

Before a crowd at the East-West Center at the University of Hawaii in Manoa in Honolulu, Hawaii, Kerry addressed what he described as four major challenges facing the Asia-Pacific region on economic, climate change, security and human rights fronts.

He said Obama's trip to Beijing to join the APEC economic leaders this fall will focus on promoting clean and renewable fuels, supporting small businesses and women's participation in the economy and expanding educational exchanges.

It will be Obama's second visit to China since his last visit in November 2009, 10 months after taking office.

While Kerry described the Trans-Pacific Partnership (TPP) as a race to the top, not to the bottom, China has not been included in the negotiation so far. And opposition to TPP has also been strong in the Congress.

Kerry, who has been enthusiastic about climate change measures, said "we need to turn today's climate crisis into tomorrow's clean energy revolution".

"The science is screaming at us," he said, adding that even kids in school understand it, clearly speaking to the large number of US congressmen who still deny the existence of climate change caused by human activity.

Kerry said no two nations can have a greater impact in influencing the climate change debate and challenge than China and the US.

He said China and the US together sent a clear message last month that the world's two largest greenhouse emitters are committed to advancing a low carbon economic growth pattern and significantly reducing our country's greenhouse gases. Kerry and Treasury Secretary Jack Lew were in Beijing last month for the 6th Strategic and Economic Dialogue. 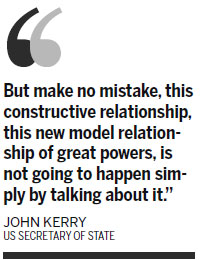 Kerry cited the launch of demonstration projects on carbon capture, utilization and storage, the adoption of stronger fuel efficiency standards on heavy and light-duty vehicles and an initiative on climate change and forest as concrete cooperation between the two countries in tackling the changing climate he described as "real, grave and growing".

"The United States and China have a special role in reducing the emissions and developing a clean energy future. But everybody, every nation has a stake in getting it right," he said.

However, Kerry said if the two countries are going to power a clean energy revolution, they have to work together to dampen security competition and rivalry in the Asia Pacific and focus on these other constructive efforts.

While reiterating that the US takes no position on the question of sovereignty in the South and East China seas, Kerry said the US does care how those questions are resolved.

He expressed the US opposition to the use of intimidation, coercion or force to assert territorial claims by anyone in the region and the concern for freedom of navigation.

Many Chinese believe that the US tries to profit from the historical maritime territorial disputes between China and some of its neighbors.

However, Kerry said he and Obama are both committed to avoiding the trap of strategic rivalry and intend on forging a relationship with China, a relationship he describes to "broaden our cooperation on common interest and constructively manage our differences and disagreements".

"It will be defined by more and better cooperation of our shared challenges, defined by mutual embrace of the rules and norms and institutions that serve most of nations in the region so well."

Kerry said he is pleased that China and the US are cooperating effectively on issues such as Iran nuclear talks, increasing dialogues on DPRK, climate change possibility, counter-piracy cooperation and South Sudan.

"So we are busy trying to define a great power relationship in places we can find mutual agreement and cooperation," he said.

Douglas Paal, vice-president for studies and director of the Asia program at the Carnegie Endowment for International Peace, believes there is nothing new in Kerry's speech.

"This was another fervent effort to demonstrate the US remains committed to the Asia-Pacific. Interestingly, the references to rebalancing were sparse, and there were no policy innovations or adjustment," he said. "So, long on rhetoric, short on substance," Paal said.

"Interestingly, he did not mention 'pivot', a term that has caused much discomfort in China," Zhu said.

"Perhaps it signals America's more conciliatory and cooperative approach to China. If Kerry's speech will serve as a guiding principle of US policy toward Asia in the next few years, China should feel pleased and encouraged because it highlights the areas where China and United States have shared interests," said Zhu, who, a POSCO fellow at the East-West Center this summer, attended Kerry's event Wednesday.

Chocolate gets new foothold in Shanghai