US, China teamwork in Africa could leverage both countries' strengths

With teams of researchers and medical experts in West Africa, the US and China should concentrate their efforts on working together to combat the Ebola epidemic, showing that the two countries can cooperate for the common good, experts said.

"The US and China have comparative advantages: China has medical teams on the ground and the US has advanced technologies and disease-control expertise," said Yun Sun, a fellow at the Stimson Center who previously focused on China-Africa relations at the Brookings Institution.

"Through inter-governmental coordination, it is possible to coordinate their individual aid efforts to maximize results."

China's three teams of experts arrived in West Africa on Monday, each made up of an epidemiologist and two disinfection and protection specialists.

The teams will be traveling to Guinea, Liberia and Sierra Leone, three of the worst hit countries in Africa. Team members have said that they will be providing technical support for China's embassies in Africa and training local Chinese on disease response.

"The Ebola crisis is not just a problem for Africa - great powers have natural responsibility and common interests [in assisting] Africa to fight the disease," Sun said.

"China has a heavy presence in West Africa in terms of infrastructural development and trade, and I think it's imperative that they do this to improve their relations with the local communities in which they work," he said.

The outbreak has already claimed more than 1,000 lives, the deadliest Ebola outbreak in history.

The World Health Organization (WHO) declared it an "international public-health emergency" last week, saying that the epidemic in West Africa was "an extraordinary event" and that the virus was spreading faster than it could be controlled.

WHO said on Tuesday that it endorsed the use of an untested medication, ZMapp, to treat the disease. ZMapp had been used on two Americans who were infected with the virus in West Africa. 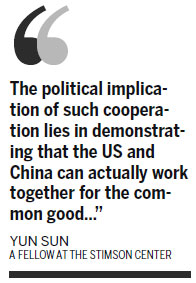 "The need is for epidemiologists right now, and both [the US and China] have sent personnel of that type," Hassad said, adding that both countries of course have to work with the local communities."

China has a long-standing presence in Africa, investing heavily in the continent's infrastructure and economy, spending more than $3 billion in 2011, according to official statistics. For this Ebola outbreak, China has pledged humanitarian aid worth $4.87 million.

The US has lagged behind China in this respect, with China overtaking the US as Africa's largest trade partner during the financial crisis in 2008, and the gap between the two has grown larger every year since, according to Sun's research.

Some analysts have framed both countries' involvement in Africa as a "competition", and Sun said that the Ebola outbreak is a good platform for the two countries to show their ability to collaborate.

"The political implication of such cooperation lies in demonstrating that the US and China can actually work together for the common good, diminishing the negative narrative about US-China power politics and global competition," she said. "Of course, Africa hopefully will be the one benefiting most from such cooperation."

On Tuesday, Wang Yaoping, director of the Chinese team helping to fight Ebola in Sierra Leone, denied a report that eight of its workers who treated patients with the disease have been placed in quarantine. Wang said that no team members have become infected and work is proceeding normally.

There are currently no known Ebola-infected individuals in China.