China can upgrade US transport

Premier Li says China, US should work together

China is willing to export technology and equipment to the United States and take part in the upgrading of its transport infrastructure, Premier Li Keqiang said on Saturday, when meeting a US delegation.

"China has made great progress in the construction of transport infrastructure. While continuing to strengthen domestic facilities, we will promote advanced technologies and equipment such as high-speed rail to the international market," Li told Bill Shuster, chairman of the US House Transportation and Infrastructure Committee and the leader of the delegation. 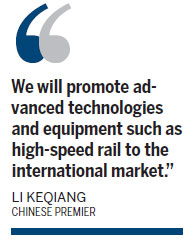 Previously, Li has helped Chinese companies bid for international rail construction projects in Africa, Europe and Asia. The US announced in 2011 that it planned to spend $53 billion over the next six years on high-speed rail.

Timothy Stratford, a partner at the Beijing office of Covington & Burling, earlier said that Chinese investors are facing great opportunities as the US is planning major upgrades of its transport facilities.

Shuster, who led the largest delegation of US congressmen to China in recent years, said most members are on their first trip to China and are eager to get a full picture of the world's second-largest economy. Shuster said the US welcomes China's rising role in regional and international affairs.

Li said China and the US should work together and promote exchanges between governments, parliaments and parties in the spirit of mutual respect and seek common ground while reserving differences.

He thanked Shuster for a message of condolence for victims of the Ludian earthquake, which claimed hundreds of lives in Yunnan province, and said China is capable of post-disaster reconstruction in the quake-leveled area.

China's holdings of US securities take a slight dip