More than 50 Chinese professors, scholars and students from universities in the Houston area attended a talent recruitment event hosted by Zhang Yiqun, consul for education, for a small delegation of Tongji University on Aug 8.

Lu Peiming, newly appointed vice-president and director of human resources at Tongji University, along with two colleagues Huo Jiazhen, dean of the School of Economics and Management of Tongji University, and Yu Xiubao, DBA director, discussed their talent recruitment policy with attendants.

"My motto has always been, first, find the right people, second, make them happy," said Lu, who worked as consul for education at the Chinese Consulate General in Houston from 2004 to 2006. Lu mentioned that he was happy to be back where he had a lot of friends and good memories.

Lu said that thanks to his work experience in Houston, he understood that China in general had little knowledge of the rich educational resources that Texas has to offer. Besides highly rated schools such as Rice and the University of Texas, "Texas Medical Center is probably No 1 in medical education and research in the world, but few in China know that," he said. "Most focus on the west and east coasts."

According to Lu, Tongji has developed a set of sophisticated mechanisms to attract and retain talent. "We designed it so that not only are we able to offer competitive salaries right upfront now that China seems to have a lot of money to invest in education, but we also look ahead and anticipate a possible budget crunch if the economic situation goes south, we will still be able to sustain such offers on our own."

Lu said that in the field of basic science, Tongji will offer a post-doctorate up to 450,000 yuan (roughly $75,000) annually with 2 million yuan ($333,000) startup research fund. For experienced professor, the salary caps at 600,000 yuan ( $100,000) and an uncapped research fund. Also, Tongji's Institute of Advanced Study offers more flexible packages tailored to individual talent and needs of exceptional scholars and professors.

Huo Jiazhen said that Tongji was strong in engineering but their program in economics and management was relatively weak. "We have yet to catch up in strategy planning and marketing skills," he said, adding that the delegation had attended the annual conference of Academy of Management in Philadelphia from Aug 1-5, and interviewed 18 candidates. 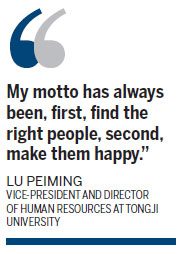 "We are looking for young talent who are willing to settle down in Shanghai and grow with Tongji," said Huo.

Le Weidong, director of the Institute of Transitional Medicine of Dalian Medical University, said he had worked at Baylor College of Medicine for more than 20 years before taking the current position. He offered advice to the young people present that they should put more weight on considering future research path than the startup fund.

He also advised them not to hesitate in grasping opportunity. He said that he had once been offered a deanship at Jiao Tong University and he regrets not taking it at that time.

More importantly, he said candidates should give themselves some time to get used to a new environment. "You may not feel comfortable when first go back, but give it three to six months before you decide to quit. More often than not, you will find it is easy to get used to it," said Le.

Zhang Yan, a professor from Jones Graduate School of Business of Rice University, also offered some advice: there are much more opportunities and funds in China than in the US, and one can easily get lost among the opportunities presented. "You need to know that to walk long on the academic path, you need to focus or you won't last," she said.

Zhang Yiqun, director and consul for education, said that China still needs a lot of talent and US-trained PhDs are well-equipped and can help advance China's education and research. "We put a lot of weight on top talent, but we also need young people to go back to China and grow with the universities. They can also help to further reform our educational system," said Zhang.