US competes for better ties with Africa

As the US administration gears up to host the USA-Africa Leaders Summit next week, one cannot help but praise and, at the same time, criticize Washington's belated effort to promote its interests in Africa.

Indeed, the lack of attention shown by the White House toward the continent in recent years was a blunder made all the more apparent by China's success in advancing its business ties in the region. A glaring case in point, the United States has much ground to cover in order to catch up with China in its economic affairs with Cameroon, a nation called "Africa in miniature", whose known natural resources are increasing daily.

Over the past decade, China's trade ties with Cameroon have continued to expand at great pace, with bilateral trade increasing to more than $1.5 billion in 2013. At the same time, China's investments in local infrastructure have paved the way for Chinese companies to benefit from the lucrative mining opportunities that are being discovered with increasing frequency in the country.

US interests in Cameroon, however, remain well behind the curve. US-Cameroon trade was estimated at $700 million in 2013, behind not only China but also Cameroon's other three major trade partners - the European Union, Nigeria and India. In 2012, these four partners traded goods and services with Cameroon worth about $6.3 billion of its total $9 billion international trade volume.

With Cameroon set to become Africa's next thriving emerging market, the US must urgently develop a country-specific strategy to diversify its trade partnerships in crucial industries, such as mining and energy, as well as agribusiness and clothes. This tactic should include coordinated efforts to develop the private sector and improve productivity, which would allow Cameroonian companies to best serve market needs in the US and American companies to benefit from the numerous consumer markets in the region. All the while, these companies would reduce their production overheads and greatly prosper from Cameroon's underutilized human capital.

As the Cameroonian government continues to modernize, early investments in the private sector will prove highly lucrative for US companies and the American economy, as a whole. Boasting a young labor force, fertile land and a stable government, the flourishing market should not be missed.

Given Africa's traditionally healthy diplomatic relations with the US and its reform-oriented business climate, there is no viable reason for our relatively poor economic ties.

But a principal issue facing US-Africa commercial relations has been Washington's attempt to apply what could only be called a "generic approach" toward countries that are diverse geographically, politically and culturally.

Indeed, although the US has pursued initiatives to facilitate economic cooperation in Africa, these programs are typically not well thought out and have largely failed to produce lasting change. 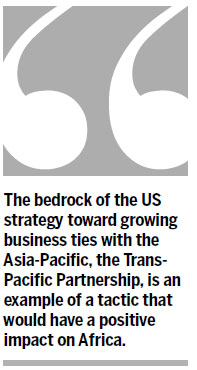 The inability of the African Growth and Opportunity Act, set to expire in 2015, to boost trade ties between the US and Africa is one such example. Although the AGOA has allowed certain African countries to export goods to the US duty free, many sectors of African economies do not benefit. In Cameroon, for instance, there has been little improvement in trade as a result of AGOA, because the country's trade with the US is characterized chiefly by petroleum-related products.

The White House, therefore, should look to develop country-specific strategies, or a continental approach, that take account of the peculiarities of our markets. The bedrock of the US strategy toward growing business ties with the Asia-Pacific, the Trans-Pacific Partnership, is an example of a tactic that would have a positive impact on Africa.

Meanwhile, aptly positioned to benefit from Cameroon's and, indeed, Africa's vast business prospects, China is already two steps ahead of the US and moving fast. If the US does not act now to cement its interests, it could soon find itself even further behind in China's wake. The same logic applies to much of Africa, whose eyes shifted elsewhere because of the recent, inattentive US policy toward the region.

Cameroon and, indeed, all of Africa are swiftly on the rise. African countries are prospering and, though open to diverse global collaboration, are more frequently granted the ear of the East - and this has been happening despite China's delayed arrival to the continent and Africa's historic partnership with the US.

But the White House's invitation to more than 40 African heads of state to visit Washington for a summit of world scale in August might indicate changing times. Certainly, this summit should lead to the formation of a newly revamped, considerate relationship between the US and its individual African partners. As Africa's relations with China continue to thrive, we steadfastly hold for Washington an open door.

The author is the president and CEO of the Cameroonian American Chamber of Commerce and a founder of the Africa Investment Agency.