People in China are the most willing group to pay out of pocket to learn early on if they have a dementia-related illness, such as Alzheimer's or Parkinson's disease, according to recently published data from a worldwide study on neurological disorders.

Despite the fact that there is no cure for these neurodegenerative disorders, 83 percent of Chinese respondents said they would foot the bill if a health insurance provider did not cover tests leading to an early diagnosis.

At the other end of the spectrum, survey takers in the United States were the least likely (27 percent) to pay out of pocket for early detection of the onset of dementia.

Dementia, a term used to describe the loss of brain function associated with specific diseases, is an increasing worry for the worldwide population. And the fastest growth in the elderly population is taking place in developing countries like China and India.

The data come from a report entitled The Value of Knowing, where 10,000 people were polled on their thoughts and feelings regarding neurological illnesses.

Millward Brown, a New York-based global market research firm, interviewed 1,000 people in 10 different countries throughout the month of June for this survey, including a group of 250 women aged 40 to 70 and another group of 250 adults with relatives over the age of 65 from each participating country.

The nations involved in the survey were: Australia, Brazil, China, India, Indonesia, Japan, Russia, South Korea, the United States and the United Kingdom.

Ben Newton, executive director of the neurology unit for GE Healthcare, said a number of things jumped out at him when he saw the report's findings.

"First and foremost for me was the fact that on average around three-quarters of the people interviewed would want to know if they had a neurological disorder, even if there was no cure," Newton said.

Chinese participants had the lowest "Yes" rate (53 percent) when asked if they would want to know info about their own health when it comes to neurological disease and dementia, but that figure climbed to 68 percent when the topic turned to the diagnosis of a loved one.

Conversely, China also had the highest percentage of respondents who said they did not want to know about a diagnosis in this type of case: 30 percent for a personal situation and 21 percent for a loved one.

About three-quarters of the global respondents said they would want to know about a personal affliction (74 percent) and even more for an ailment affecting a friend, family member or significant other (81 percent). 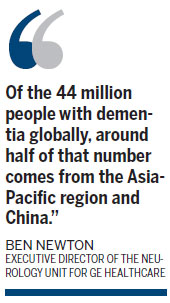 As of 2013, 44 million people worldwide were living with dementia. And data from a 2013 report by the United Nations Department of Economic and Social Affairs (UN-DESA) said that figure is set to increase approximately twofold every 20 years.

"Of the 44 million people with dementia globally, around half of that number comes from the Asia-Pacific region and China," Newton said. "We are working with our team based in China to develop diagnostics, and the team in China is very interested in the results."

It's easy to concentrate on the negatives Newton said, but "there are things that can be done despite there being a lack of a cure".

"What we want to try to do here is inform people that these diseases hopefully one day will be preventable, but it's not just about getting old," he said, "but rather because of a pathological reason."

Newton said this type of a data set is "a start and a step forward" in the effort to learn more about these neurological diseases.

"A few years ago people weren't thinking of dementia as a disease that needed to be treated or diagnosed because it was very much associated with the elderly," he said. "But the issue is those changes can occur and they're not just associated with old age, and that's what we have to get a hold of."