Just moments after Dennis Blair, former commander of the US Pacific Command and former director US National Intelligence, expressed his puzzlement over why China and South Korea would still have historical issues with Japan, he got a quick explanation.

One Japanese journalist rose from the back of the audience, saying that Japanese studies show that the Japanese military had not systematically recruited and coerced comfort women during the WWII.

An American woman sitting in the front clearly could not let the comment pass. "That's not true!" she shouted.

The setting was a seminar exploring the future of progress in Northeast Asia held on Tuesday at the Heritage Foundation, a conservative think tank based in Washington on Tuesday.

Ahn Ho-Young, South Korea's ambassador to the US and a former vice minister of foreign affairs, also pushed back, citing studies that show convincing evidence of coercion involving the comfort women issue. He cited the 1993 Kono Statement by Japanese Chief Cabinet Secretary Yohei Kono which concluded that the Japanese Imperial Army had forced comfort women to work in military-run brothels during WWII.

"That's why we in Korea keep saying that denial is not helpful," he said, repeating a long-standing view also expressed by South Korea President Park Geun-hye.

"True courage lies not in denying the past but in looking squarely at history as it was and teaching the growing generation the correct history," Park said back in March when Japanese Prime Minister Shinzo Abe and other right-wing Japanese politicians wanted to re-examine the Kono Statement.

Ahn, a career diplomat of 36 years, refuted the notion that somehow Japan had taken responsibility for the war crimes and it was South Korea which has not accepted it. The same argument was also heard in the US and some other countries regarding China, as if it were China and South Korea who are obsessed with history, without Japanese provocation.

Ahn blasted a former senior Japanese official who wrote an op-ed in the Washington Post recently arguing that South Korea's growing ties with China will undermine its relationship with the United States.

"I am very disappointed," said Ahn, unhappy about the op-ed's attempt to sow discord between South Korea's relations with China and the US. 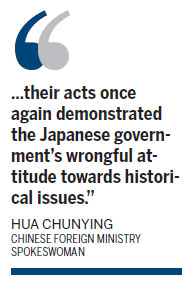 While expressing his optimism over the future of the South Korean-Japanese relationship, Ahn blamed the ups and downs in the bilateral relationship on Japanese politicians' recidivism not to recognize the past and take responsibility for what had happened.

Ahn clearly did not see eye to eye with Blair when the latter tried to downplay Japanese politicians paying homage to the Yasukuni Shrine, where 14 Class A Japanese war criminals from WWII are honored.

South Korean President Park expressed her disappointment right after Abe sent a ritual offering to the Yasukuni Shrine on Aug 15, the day Japan surrendered in WWII.

"China is firmly opposed to that," she said.

Hua described the core of all issues surrounding the Yasukuni Shrine as whether the Japanese government can adopt a correct understanding of and attitude towards its history of aggression, whether it can respect the feelings of the people in the victimized Asian countries and whether it can honor the positions and commitments it has made so far on historical issues.

"Only when Japan honestly faces up to and deeply reflects upon its past of aggression, and truly makes a clean break with militarism, can the China-Japan relationship have the chance to realize a sound and stable development," she said.

The US has long been troubled by the fact that its two main Asian allies - Japan and South Korea - would not come together on security issues, thereby decimating the so-called US-Japan-South Korea trilateral security.

While many believe such trilateral security is aimed at China, Blair said it is not in the US interest to try to make Japan and South Korea into an anti-China coalition, a statement that surprised quite few given his critical rhetoric on China throughout the seminar.