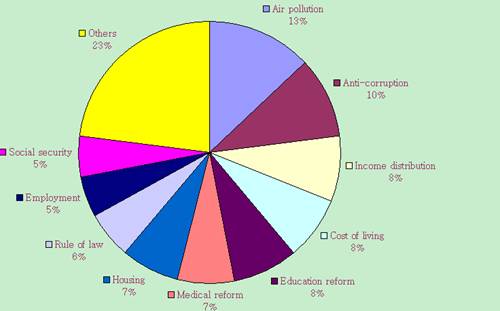 Air pollution, corruption and the wealth gap are the three issues of most concern to readers ahead of the annual parliamentary sessions of China, dubbed as "two sessions", according to an online survey by the China Daily website.

The issue of pollution has grown in importance for people since last year's survey which then showed the top three issues as being the cost of living, the environment and employment.

This year is crucial for the deepening of reforms, with attention being focused on how the "two sessions" will handle the ongoing development of the country and further improve people's livelihood.

The survey was posted on the China Daily website and its mobile phone apps as well as the Sina Weibo and WeChat platforms with 3,886 readers responding, 60 percent of whom were from countries other than China.

The majority of respondents said air pollution is the most urgent issue needing to be addressed and they expect the "two sessions" to put forward practical measures to tackle the problem.

"I'm looking forward to a brighter sky in Beijing and other major cities across the nation. Tougher measures should be taken to curb pollution from industry. Now we have no choice but to rely on the wind to blow away pollutants and bring fresh air," one reader said.

The anti-graft drive, income distribution, cost of living and fair education were the other top concerns for respondents. "I strongly support the current anti-corruption drive. I hope President Xi can maintain this policy for the duration of his term in office," another reader said.

Top 10 issues of most concern, according to the online survey conducted by China Daily website:

US firms to lower China stakes in '15