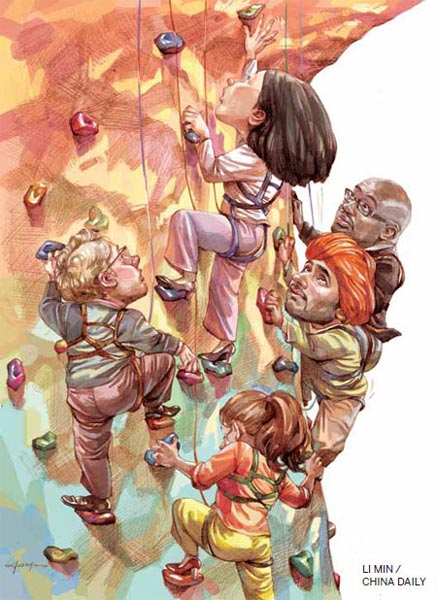 Can China break out of the middle-income trap? Many countries find the move from low- to middle-income status straightforward but discover the next step up is a bridge too far.

In his book, Breakout Nations: In Pursuit of the Next Economic Miracles, which has just been published in Chinese as well as in a paperback edition, Ruchir Sharma, head of emerging market equities at Morgan Stanley and leading economic commentator, makes the case that China alone among the BRICS nations (Brazil, Russia, India, China, and South Africa) will make it to the next stage.

He believes it will be able to move on from its 2012 per capita income level of $6,091, according to the World Bank, to around $20,000 within 15 years, providing a comfortably high income.

He makes the point, however, that it will be easier for China to move up the ladder if it sets its growth targets lower at a more sustainable 5 to 6 percent.

Chasing higher rates of growth through excessive investment in infrastructure, he argues, carries the risk of a bust that could see it behaving like a yo-yo in the middle-income trap like many other countries before it.

He paints a gloomier picture for China's fellow BRICS members. He sees Brazil, despite the opportunity to showcase itself by staging next year's FIFA World Cup and the 2016 Olympics, as indebted without a manufacturing base and likely to remain in the middle-income mire in which it has been stuck for 40 years. Its per capita income was actually down nearly 10 percent on its 2011 level of $12,576 at $11,340 last year.

Russia, he argues, is entirely vulnerable to commodity prices, which are now in decline after soaring over the last decade.

India, he points out, has, unlike China, been slow to urbanize and struggles because the IT revolution has only benefited an elite section of the population. Its per capita income of $1,489, according to the World Bank in 2012, means that it currently just makes it as a low middle-income country.

South Africa, which became a BRICS member only in 2010, has a per capita income higher than China's at $7,508 but, according to Sharma, is on a downward trajectory and may soon be eclipsed by African rival Nigeria as the dominant economy in Africa.

The big question about whether China itself will eventually break through continues to divide economic commentators. George Magnus, senior independent economic adviser to UBS AG, believes that China has the necessary firepower to make it into the top league.

"I think the necessary conditions are being able to build a world-beating, very competitive manufacturing capacity and, second, to be geographically close to or part of global supply chains. For the moment China ticks both boxes and a lot of other emerging markets don't. I don't think that there is much risk that China won't press on up the middle-income league over the next decade," he says.

The author of Uprising: Will Emerging Markets Shape or Shake the World Economy? also says it will still be hard for China to step up to the premier division of high-income nations.

"There are only three things that sustain reasonably high rates of growth, which are labor, capital and what we economists nerdily call total factor productivity, which is about technical progress.

"What China has to do is to improve the quality of its labor, which is essentially about education and making people equipped to make a more effective contribution to offset the physical drag that goes with an ageing and declining working population."

There remain many different definitions of country income status. According to the World Bank, a country moves from low income to low-middle income when it achieves a per capita income of $1,035. It moves into upper-middle income at $4,086 and high income at $12,616.