September has certainly seen its fair share of new smartphone releases but the latest company to enter the fray is China's ZTE Corp with its new flagship device, the ZTE ZMAX.

"The ZMAX is the latest example of ZTE designing devices with the user in mind," Lixin Cheng, chairman and CEO of ZTE USA, said Tuesday during a private launch event in New York City. "When customers see the unique look of ZTE smartphones and the technology, they are surprised our phones are a third of the cost of mainstream brands."

"It has more battery life, [a larger] screen and more style but it does not cost you more," Lixin said.

The 5.7-inch device, which was unveiled at a private announcement and demonstration in New York on Tuesday, will be available through an exclusive partnership with US-based mobile service provider T-Mobile.

A selling point for ZTE will be a price tag of $252, which is a fraction of some of the similar handsets already available in the market, according to Andrew Elliott, senior director of marketing at ZTE USA.

"The last and most important thing consumers are looking at is the value equation that's being offered in the market place, and that's part of what we see as a changing tide," Elliott said. "Consumers are becoming a lot savvier in terms of how they go out and look to purchase a smartphone." 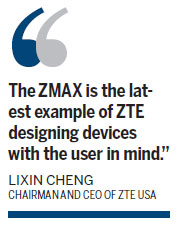 ZTE USA, a US subsidiary of the ZTE Corp based in Richardson, Texas, is the fourth largest smartphone manufacturer in the US.

The smartphone manufacturer is also at the forefront of standardization for the 4G LTE markets, with nearly 800 standard-essential patents (SEPs) and licensing agreements with industry mainstays like Qualcomm Inc, Siemens AG and Microsoft Corp.

And ZTE was the second highest international applicant for Patent and Cooperation Treaty (PCT) applications in 2013, second only to the Panasonic Corp of Japan.

T-Mobile US Inc, a subsidiary of German telecommunications firm Deutsche Telekom AG, is a US-based provider of wireless voice, messaging and data services.

For diehard fans of high-tech gadgets, the last few weeks have been a whirlwind with a number of other companies releasing their own oversized handset devices, a group that includes Apple Inc and Huawei Technologies Co.

So the key for ZTE and T-Mobile going forward will be finding ways to leverage their respective expertise for new business opportunities, Jason Young, senior vice-president of marketing at T-Mobile said in a Tuesday press release.

"ZTE's ZMAX combines the latest technology with distinctive design to give our customers an incredibly affordable large screen smartphone," Young said. "And on T-Mobile's LTE network, you've got worldwide coverage."

The new ZTE ZMAX will be available for sale starting Sept 24.

Alibaba's shares down for second day