The 18-story project for low, moderate- and middle-income households is expected to open in fall, 2016. Tenants will be selected through a city-administered lottery process.

"New York enjoys the reputation as the capital of the world, and its prosperity lightens the dreams of international investors, including Greenland Group," said Zhang Yuliang, chairman of the state-owned Greenland Group, parent company of Greenland USA. 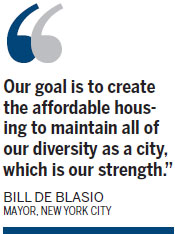 At Monday's ceremony, New York Mayor Bill de Blasio said the project would provide "a huge number of affordable units that people from this community can live in and continue to be Brooklynites."

"There are very few phrases I like better than 100 percent affordable housing," he said.

With revenue of $41 billion last year, Greenland Group is one of China's largest conglomerates and focuses on energy, finance and real estate. The developer entered the US market in 2013 as the Chinese real estate market was cooling down. After investing $ 1 billion in the Los Angeles Metropolis project last July, it took a major stake in the Pacific Park project in downtown Brooklyn last October.

The affordable housing project to be built at 535 Carlton Avenue in downtown Brooklyn complies with New York City's Inclusionary Housing Program (IHP), which dates back to 1987. Under current IHP regulations, if new developments or enlargements of more than 50 percent of existing floor area in designated areas can allocate at least 20 percent of the residential floor area for affordable housing, developers can get various subsidies and a floor area bonus.

Brooklyn is ranked as the least affordable market in the United States, even less affordable than Manhattan, by the Irvine, a California-based data company. The company says a resident has to spend 98 percent of median income to afford a median-priced home of $615,000.

When he became mayor this year, de Blasio vowed to build and preserve at least 200,000 affordable units over the next 10 years. "Our goal is to create the affordable housing to maintain all of our diversity as a city, which is our strength - including our economic diversity," he said on Monday.

The construction of Barclays Center and Atlantic Yards have driven home prices up in surrounding areas, which has led to discontent among some local residents.

"The skyscraper sort of thing destroys neighborhoods," said Patty Hagan, a 71-year-old protester outside the ceremony who has been living in the area for over three decades. She told China Daily that rising home prices are driving poorer residents outside.

Norman Oder, a blogger and activist who has been opposing the Atlantic Yards project is also skeptical. He said the so-called "affordable" housing, though cheaper than market prices, might still be unaffordable for ordinary people.

China, US get things done at trade talks

Build, not break, a bridge for people