"The Chinese government supports the participation of Chinese social organizations in the economic and social development of the country. In the same vein, the Chinese government welcomes the conduct of friendly exchanges and cooperation in China by foreign NGOs," President Xi Jinping said in a congratulatory letter to the Civil Society 20 China 2016.

"Efforts are being made to facilitate their operation in China and protect their legitimate rights and interests through creating an enabling legislative environment," Xi said.

More than 200 NGO representatives and experts from 54 countries and regions attended the C20, themed "Poverty Eradication, Green Development, and Innovation: Role of Civil Society", which was held in Qingdao, Shandong province, on Tuesday and Wednesday.

State Councilor Yang Jiechi, who delivered Xi's message at the opening ceremony, said China is actively reducing poverty through green development and innovation, and will continue to support both domestic and international civil societies in these fields.

Yang added that foreign NGOs should feel assured that the new regulation will give them more access to government services.

"The open door of China will never be closed," Yang said. "Some of you who came to work in China in the early days might have met inconveniences due to the lack of law and supervising government organs. As the new law goes into practice, these problems will be solved gradually." Yang also said that government officials' awareness and ability to serve the public are improving.

Earlier in April, China approved new regulations on foreign NGOs operating in China while guaranteeing better services from the government.

The law forbids foreign NGOs from taking part in or paying for profitable or political activities. It also requires these NGOs to register with public security bureaus. Meanwhile, local government organs are obliged to provide services to foreign NGOs to facilitate their legislative activities.

The new law will take into effect on Jan 1.

"In addressing poverty eradication, green development and innovation, the government bears important responsibilities, while civil societies have a role to play as forerunner, communicator, supervisor and facilitator. In this regard, the two stakeholders will make concerted efforts to forge ahead in tandem," said attendants at the meeting in a joint communique.

A total of 30 suggestions were raised in the communique, covering education, tax reform, environmental protection and medical service, among other fields.

You Jianhua, secretary-general of the China NGO Network for International Exchanges, which co-hosted the event with the United Nations Association of China, said that there are 660,000 NGOs registered under China's Ministry of Civil Affairs, and they have played a key role in international exchanges. 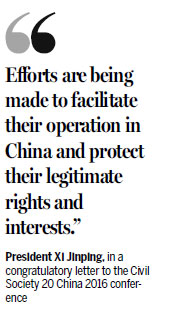