KFC's Yum should 'build on reputation' 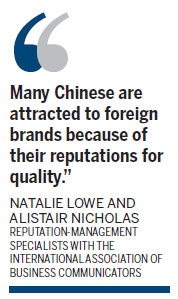 To deal with fallout over a food-safety scare at its restaurants in China last year, KFC parent Yum Brands Inc needs to be proactive in recognizing the value Chinese consumers assign to a brand's reputation, according to corporate-communication experts.

"Many Chinese are attracted to foreign brands because of their reputations for quality," wrote Natalie Lowe and Alistair Nicholas, reputation-management specialists with the International Association of Business Communicators.

"In the cases of food and beverages Chinese consumers are attracted to (and willing to pay a premium for) foreign brands because of their reputations for standards in hygiene, health and safety," according to the two experts from the San Francisco-based trade group.

Yum, which has been seen as a model for how a foreign company can succeed in China, on Tuesday posted a 6 percent drop in fourth-quarter net profit and warned that it expects 2013 earnings to shrink.

It explained that customers shunned restaurants after media reports in December that some of KFC's former suppliers in China used excessive antibiotics in their chickens.

Although analysts said a slowdown in the food-service industry also influenced Yum's disappointing results, investors pushed the company's New York-listed shares down by 2.9 percent on Tuesday.

With nearly 5,300 restaurants in the country, mostly KFC outlets, Yum generates more than half of its sales from China. The company also owns the Pizza Hut and Taco Bell chains.

In a conference call with analysts, CEO David Novak said the best thing the Kentucky-based company could do now is give consumers time to forget the matter and move on. Reuters reported that Yum is strengthening its food safety standards and will launch an aggressive marketing campaign after the Feb 10 Lunar New Year holiday to underscore its commitment to food safety.

In a statement, Yum acknowledged that "the negative effect on the KFC brand" in China over the past seven weeks had been "intense". But Novak said the company remains "more committed than ever" to restoring customers' confidence and regaining their brand loyalty.

In the social-media age, reputation management is crucial for companies that do business in China. In a 2011 article published by the business communicators association, Lowe and Nicholas wrote that numerous scandals affecting consumer products, particularly food, have led Chinese consumers to be "very much concerned with brand and corporate reputation".

The two authors are, respectively, vice-president of the Emergent China practice and executive vice-president for the Asia-Pacific region, at Weber Shandwick, a global public relations firm.

A survey by Weber Shandwick of 1,375 consumers and 575 senior executives worldwide, including some in China, showed that nearly half of Chinese consumers frequently or regularly discussed a specific company's reputation with others.

Lowe and Nicholas recommended that companies use social media in pushing out key messages.

"Companies need to integrate their brand's identity and add social-media elements to their traditional print or broadcast messaging," according to the authors. The company also should engage the public while being "authentic and transparent".

KFC will pay for its failures