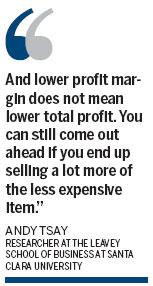 Starting Aug 9, Apple device users in China who have concerns about their USB power adapters can drop them off at any Apple retail store or authorized service provider and get an official Apple USB adapter for $10 - or nearly half price.

The special pricing is limited to one adapter for each iPhone, iPad or iPod.

Apple announced this USB Power Adapter Takeback Program on Monday. The program will kick off in the US on Aug 16 and run through Oct 18.

Apple did not mention any reasons for the program, other than saying that "recent reports have suggested that some counterfeit and third-party adapters may not be designed properly and could result in safety issues" on its website.

"While not all third-party adapters have an issue, we are announcing a USB Power Adapter Takeback Program to enable customers to acquire properly designed adapters," the company said.

Some believe the program is a response to two recent incidents of electrocution in China: a 23-year-old flight attendant in Xinjiang was electrocuted after picking up her iPhone 4 to answer a call while it was plugged in to an electrical outlet; and a 30-year-old man, who is now still hospitalized, got a shock from his iPhone 4 while it was charging.

After the tragedies, Apple posted guidelines on its Chinese website recommending that customers use only authentic Apple USB adapters.

The exact circumstances surrounding the flight attendant's death remain unclear, but the series of measures Apple announced indicate that the California-based technology giant has grown increasingly careful about how it approaches China, its second-largest market.

In its last quarter, Apple reported a 1 percent year-on-year growth in global sales, but in Greater China, sales fell 14 percent to $4.6 billion. The decline was attributed to fewer inventories and a lessening demand for iPhones.

Last week Apple CEO Tim Cook made his third trip to China in 18 months. Although details about his trip are sketchy, analysts speculate that Cook met with the head of China Mobile to discuss a potential deal, as well as with partners to discuss Apple's shrinking sales in China.

One move Apple is rumored to be planning is the release of cheaper iPhones in the coming months to attract more consumers in markets such as China.

"Lower price does not necessarily mean lower profit margin - as long as you make the right choices in the technologies, materials, and supply chain," said Andy Tsay of the Leavey School of Business at Santa Clara University. "And lower profit margin does not mean lower total profit. You can still come out ahead if you end up selling a lot more of the less expensive item."

"The large untapped populations in the emerging markets offer this possibility," Tsay said.

The trick for Apple will be to do this without undermining the brand image, he added.

Kenneth L. Kraemer, a professor at UC-Irvine, said although accusations such as those could hurt sales of Apple products in China, he does not know how much people who buy the products actually care about these issues.