China will overtake US as world's No 1 consumer: study 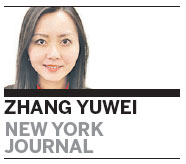 Even with the ongoing slowdown of China's economic growth, the world's No 2 economy is expected to overtake the US to become the world's largest consumer market in the next five years, according to a new report by Standard & Poor's (S&P).

The report - entitled Financial Risks Are Rising as Retail and Consumer Product Companies Step up their Spending Spree - pointed out that in 2012, total retail sales of consumer goods in China grew 14.3 percent to about $3.29 trillion, compared with $4.35 trillion in the more mature market of the US.

China's retail and consumer product industries are refining their growth strategies by looking outside of the domestic market for growth opportunities. Overseas acquisitions, says the report, are attractive options for Chinese consumer companies to improve product quality, increase differentiation, and acquire better brands.

The most recent example is the offer by China's largest meat producer, Shuanghui International Holdings Ltd, to purchase Virginia-based Smithfield Foods Inc, the world's largest pork processor, for $7.1 billion, including a mix of debt and $4.7 billion in cash.

The Shuanghui-Smithfield deal is currently being reviewed - for a second time - by the Committee on Foreign Investment in the United States. If it gets approved, it will become the largest takeover of a US firm by a Chinese buyer.

Shuanghui and Smithfield seem to form a perfect fit.

Part of that strategy incorporates the interest of Chinese consumers in foreign brands, said Schulz, who manages the US retail team.

"So the ability of the domestic Chinese retailers to sell to the local consumer and compete with foreign brands is already a major factor in the competitive landscape," he said. "As the Chinese economy grows and the base of consumers with disposable income increases, selling locally should remain an attractive but competitive proposition for Chinese retailers."

Chinese investment in the US rocketed to $6.7 billion last year (compared to $1 billion in 2008), according to research firm Rhodium Group, which tracks Chinese overseas investment.

In the first quarter of this year alone, Chinese companies spent $2.2 billion for eight acquisitions and nine Greenfield projects in the US, according to Rhodium. Big transactions included Chinese auto-part firm Wanxiang's $257 million purchase of the bankrupt Massachusetts-based battery maker A123 Systems.

Wanxiang America - which now employees about 6,000 people across the US - does several merger and acquisition deals in the US to expand its business and brand recognition, said Ni Pin, president for the company's US operation.

"M&A is an important part of our business strategy here in the US," said Ni.

China's retail and consumer product companies have sufficient financial resources to satisfy their growth appetites, according to the report. "Many are sitting on huge piles of cash and have limited borrowings. They also have good access to the capital markets as a funding source. But the risks of overly ambitious takeovers are high," said the report.

While further expansion by Chinese consumer and retailers will grow, the track record for "organic international expansion" in overseas markets is mixed, noted S&P's Schulz.

"Some restaurants and some apparel retailers have been moderately successful with organic growth in China," said Schulz. "There has not been a large amount of cross border M&A in retail that we know of. Knowledge of the local customer is so very critical."

Despite some big deals made by Chinese firms in the overseas markets including in the US, the portfolio of industries is still small or limited mostly because retail is a local business and not all brands travel successfully to other markets, noted Schulz.

"So whether it is a Chinese retailer or a European retailer electing to expand into a new overseas market, the challenges are not few - supply chain, critical mass, and local consumer preferences are just few to consider."

Chinese brands also face the challenge of competing with well-established foreign brands, which often have gained strong brand appeal and are backed by solid financial resources as well as a global network, said Schulz.

"They will remain strong competitors in the global markets, and will likely become increasingly competitive in the Chinese local market," he said.

Japan exports to China at lowest in four years

Fish ecosystem 'on verge of collapse'