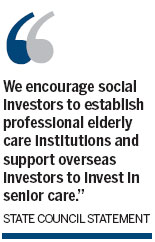 Foreign and private investors are being encouraged to invest in the elderly care market, a move top policymakers say can help boost domestic demand and create jobs.

The government will simplify procedures and slash administrative charges to allow non-governmental groups to run homes for the elderly, according to a statement issued after an executive meeting of the State Council, presided over by Premier Li Keqiang, on Friday.

Local governments must explore ways to buy elderly care services from non-governmental and private organizations and play a role in channeling social capital into the sector, it said.

The State Council promises to develop care for the elderly into a "sunrise" industry and make it an important force in improving the economic structure, people's livelihoods and industrial upgrading.

Dang Junwu, deputy head of the China Research Center on Aging, said the moves reflect the government's increasing recognition of private investors' role, as resources from governments and families alone will not be sufficient to ensure good care for the elderly.

China has the world's largest elderly population of nearly 200 million and this is growing rapidly amid longer life expectancy and a slowdown in births.

Care for the elderly is mainly undertaken by governments and individual families.

Dang said the market has to be opened for private capital to share the burden. He called for the government to provide a level playing field for private and public investors, and to design policies to attract private players.

The elderly care market is the latest industry where the government has vowed to open wider to private and overseas investors, as part of an effort to transform its role under the new leadership.

Late last month, Premier Li vowed to give more access to private investors in the railway industry, a sector that used to be largely dominated by State-owned businesses.

The new central leadership has reduced the approval power of government agencies since taking office in March, when it pledged to cut a third of 1,700 government items requiring approval in five years.