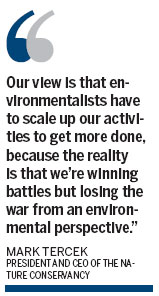 The China Three Gorges Corporation (CTGC), which operates the world's largest hydroelectric plant, will partner with US-based nonprofit The Nature Conservancy to make hydropower dams safer for the environment and more profitable.

Hydropower dams are the leading form of renewable energy in the world, and are expected to double in capacity in the coming years. The way that the technology develops will have an impact on rivers including the Yangtze, Mekong, Magdalena and Tapajos.

"Many people are against building dams, but the world needs them," said Cao Guangjing, CTGC's board chairman. "Modern society needs clean energy, and a more reliable water supply. On the other hand, we need to protect the natural environment, and to do that I think we can build a relationship between economic development and environmental protection. We're excited to find an influential partner like TNC, because we need a new vision."

As one of the world's largest energy companies and operators of The Three Gorges Dam, CTGC is in a position to take the lead on hydropower innovation, Tercek said. Founded in 1993 to oversee and construct that dam, the State-owned power company has since acquired China International Water and Electric Corporation (CWE) and in 2009 was reported to have assets totaling 280.98 billion yuan ($45.8 billion).

"Our view is that environmentalists have to scale up our activities to get more done, because the reality is that we're winning battles but losing the war from an environmental perspective," said Mark Tercek, president and CEO of The Nature Conservancy. "We know the dams are coming, so our question is: How can we build dams that generate hydropower but will also secure protection from floods and protect ecosystems? We have the know-how and the science to tackle those issues, but not alone. One of most important strategies is to form partnerships with players who will have the greatest impact."

The partnership with The Nature Conservancy, which has since 1951 protected thousands of miles of rivers and more than 119 million acres of land globally, extends a collaboration that began with an earlier project focused on the Yangtze River. That project successfully replenished the fish populations through the sharing of information and scientific research between TNC's conservationists and CTGC's engineers.

The new partnership is a five-year agreement, but both parties expect to continue working together indefinitely, they said.

Tercek believes that the agreement represents a new approach to conservation. Environmental organizations have traditionally depended on funding from the government or independent sources, but the methods of conservation that TNC and CTGC are working on will be beneficial for both parties, he said.

One method the organizations are aiming to perfect involves the restoration of flood planes, or the natural areas that line rivers. The construction of communities and other structures along rivers has created natural benefits of those flood planes, including the absorbing of water and the spreading of sediment for agriculture, said TNC's regional managing director for Asia Pacific Charles Bedford.

"If we can successfully restore flood planes while also filling up reservoirs for the dams, there can be a win-win outcome for both the economy and the environment," Tercek said. "And the more revenue there is, the more of a chance that revenue can be invested in continued environmental restoration, providing funding for our work. It's exciting, and it's a totally new approach. We used to think of conservation as a zero-sum game, but we're realizing that doesn't have to be the case."

Typhoon wreaks havoc in the south