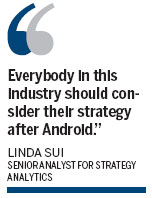 ZTE Corp's selling of its inexpensive "Open" smartphone on e-commerce site eBay will give it deeper market penetration and build up its brand, an analyst said.

Earlier this month, Shenzhen-based ZTE began selling the phone - which targets "first-time" smartphone buyers - on eBay for about $80 in the United States, and about 60 British pounds in the United Kingdom.

"Everybody in this industry should consider their strategy after Android," Linda Sui, senior analyst for Strategy Analytics said in an interview Monday. "Each operating system has its life cycle, but nobody can dominate the market forever."

Android-powered phones and Apple Inc's iPhone together account for about 90 percent of the global handset market.

Although CNET reviewer Joe Svetlik called the ZTE Open's features unspectacular, he emphasized that the phone's big selling point is its software.

"We could see a glut of handsets made by manufacturers and networks how they see fit," Svetlik wrote on the CNET website. "It has Android squarely in its sights, promising anyone making a Firefox handset won't be beholden to Google."

For ZTE, the kudos continue a string of positive news for China's second-largest phone equipment maker after security concerns raised by a US Congressional Report last fall scuttled its efforts to crack the US telecommunications equipment market and hammered its financial results. The report said telecom gear from ZTE and Chinese rival Huawei Technologies Co represented threats to US security. The companies rejected the report's claims as false.

But ZTE - which is in its 15th year of US operation - has rebounded in a big way as it strives to generate business in the US - seen as the linchpin to its global success.

In the second quarter, the company's smartphone shipments were the fourth-highest in both North America and the world, trailing the Republic of Korea's Samsung Electronics, Cupertino, California's Apple and ROK's LG Corp, according to Sui. Reflecting ZTE's rise, in 2012, ZTE was No 7 in shipments in North America and No 9 worldwide, the analyst said.

Earlier this year, ZTE formed a strategic partnership with computer giant Intel Corp, resulting in the release of the joint venture's first product in March - ZTE's new Geek smartphone, powered by the super-fast new Intel processor. ZTE offered more powerful Intel chips in its phones to separate the company from other smartphone makers, who typically use lower energy but slower chips produced by Intel rival ARM.

Although the company is gaining market share by selling inexpensive, entry-level smartphones in the Chinese mainland, most of its US success so far has come from selling its smartphones under other brands.

China - the world's largest mobile phone market - "is now playing an increasing role in handset distribution globally," the analyst said. "Cooperation with eBay will be a positive move for ZTE to build up its brand recognition and to build up the Firefox operating system branding among consumers."