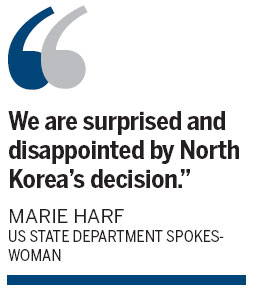 The cancellation by the Democratic People's Republic of Korea of the visit by special US envoy Robert King has cast doubt of the immediate release of a US prisoner there.

The US State Department issued a statement on Friday saying the DPRK informed the US that it had rescinded its invitation for Special Envoy for North Korean Human Rights Issues Ambassador Robert King to travel to Pyongyang on Aug 30-31 on a humanitarian mission focused on securing the release of US citizen Kenneth Bae.

Bae, a 45-year-old tour operator and Christian missionary, was arrested last November and sentenced to 15 years of hard labor on April 30 by the DPRK Supreme Court for "hostile acts to bring down its government".

King was scheduled to fly from Tokyo to Pyongyang on Friday after visiting China, the ROK and Japan.

While Harf said the US has sought clarification from the DPRK on the decision, the DPRK foreign ministry said on Saturday it had agreed to King's visit on humanitarian grounds, but the US had ruined the atmosphere of dialogue by flying B-52H strategic bombers over the Korean Peninsula for nuclear bombing drills.

"The strategic bombers' intrusion into the air space over the Korean Peninsula is the most blatant nuclear blackmail against us and a military threat to us," the DPRK's official Korean Central News Agency said in announcing the foreign ministry statement.

The DPRK accused the US of "beclouding the hard-won atmosphere of humanitarian dialogue in a moment".

The US and the Republic of Korea ended their 12-day annual Ulchi Freedom Guardian military drill on Friday, with 56,000 ROK troops and 30,000 US soldiers participating in the computer-aided exercises to test and improve their defense posture against the DPRK.

Charles Armstrong, a history professor and an expert on the Korean Peninsula at Columbia University, said the US military exercises are a convenient excuse but probably not the real reason for the cancellation of King's visit.

"The DPRK leadership does not seem to be ready for discussions with the US at this point, but it is difficult to say exactly why," Armstrong told China Daily on Sunday.

"The Kim Jong-Un government has said it does not want to bargain Kenneth Bae's release for a high-level American visit, as they have done with other American prisoners in the past, and thus the prospects for Bae's release do not look good at the moment," he said.

Bae was moved to a hospital in Pyongyang last month due to his deteriorating health. In a recent interview with Choson Sinbo, a pro-DPRK newspaper in Japan, Bae appealed to the US to send a high-ranking official to Pyongyang to "apologize" for his alleged crime and help secure his release.

According to a videotaped sermon Bae gave at a St Louis church in 2011, the missionary was trying to build a covert proselytizing operation in Rason, a trading city in northeast DPRK, using a tour business as a front.

Tensions on the Korean Peninsula flared following the DPRK's nuclear test in February - its third - but have eased in recent months following a flurry of diplomatic efforts.

Seoul and Pyongyang have agreed in the past weeks to reopen their jointly run Kaesong industrial zone in a DPRK border city, which was closed during the crisis.

Last Monday, Wu Dawei, China's special envoy for Korean Peninsula affairs, went to Pyongyang in a bid to restart the Six-Party Talks and further improve the situation on the Korean Peninsula, according to the Chinese Foreign Ministry. The talks, which involve the DPRK, the ROK, China, the US, Japan and Russia, have been suspended since 2008.

The DPRK has long contended that its nuclear program is in response to the threat from the US, which holds frequent military drills on the peninsula.

While the DPRK has indicated lately that it is willing to resume talks about its nuclear program, it does not accept preconditions from the US. The US, however, insists that the DPRK's pledge to abandon its nuclear program is a condition for any talks.

Guan Youfei, director of foreign affairs at China's Ministry of Defense, called for more flexibility from the US on the issue in order to restart the dialogue.