Michigan gov in China, yet again

As Michigan Governor Rick Snyder further strengthens his state's trade relationship with China during his third China trade mission there, Jamie Clover Adams, one of Snyder's delegation members and the head of Michigan's Department of Agriculture and Rural Development, is making sure the state's agribusinesses doesn't miss a single opportunity.

Michigan wants to export to China as well as seek investment from it, is the message Snyder delivered on his previous trip to China. Adams, who also along on that trip last fall, said the goal of this trip is about the same. "It's just an extension of what we did last year," Adams said. "We continue to build the relationship in a way that will benefit both Michigan and China."

This mission started in Shanghai on Sept 3, where Adams said they met several business leaders and saw the potential cooperation opportunities already. The trip, which ends Sept 13, will include stops in Beijing, Chongqing and Tokyo, Japan.

Dried fruits, dairy products, baking ingredients and fresh blueberries are the main products Michigan wants to export to China, according to Adams.

Michigan is the US' leading producer of cultivated blueberries. Blueberry production there reached 87 million pounds in 2012, according to USDA National Agricultural Statistics Service.

However, fresh blueberries are not allowed into the Chinese market yet. "If we were able to meet with the China's agricultural minister in Beijing, we would tell him about opening the Chinese market to fresh Michigan blueberries," Adams said, adding that they are also working on it with USDA officials.

"It's not like we are replacing Chinese blueberries," she said, "we will be a supplement to what they already have here in China." 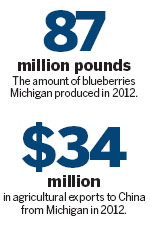 "We will definitely making efforts on this area," she added.

Governor Snyder's administration made it a goal to double the state's agriculture exports in five years when he took office in 2011. Although 2012 has been the worst year in recorded history for Michigan fruit because of the freezing weather followed an unusually warm spring, Michigan agricultural exports to China were $34 million, up $11 million from 2011, and Adams said China ranks No 5 or No 6 in the state's agricultural exports.

"You know Canada is our biggest trading partner because it just right there," Adams said, adding that its China market is continually growing.

Promoting Michigan dairy products is another priority on her China agenda.

She said the US dairy export council had outlined some of the regulatory hurdles they might have going into China. "I really need to raise those issues with the appropriate Chinese official," Adams said. "I can understand their concerns and share how Michigan has food safety requirements."

Diplomacy gets under way on Korean front

Michigan gov in China, yet again