Largest takeover of US company by China ever

Calling it a "great transaction" for shareholders, US farmers and agriculture, Smithfield Foods Inc. CEO Larry Pope announced shareholders had approved the pork giant's acquisition by Shuanghui International Holdings Ltd, the biggest Chinese takeover ever of a US company.

"The partnership is all about growth, and about doing more business at home and abroad," Pope said Tuesday about the $4.7 billion acquisition, and he promised to keep things "business as usual - only better" at Smithfield.

More than 96 percent of the votes cast backed the transaction, representing about 76 percent of the company's outstanding stock, Smithfield said. The acquisition, valued at $7.1 billion including debt, is expected to formally close by Thursday, after which the Virginia-based company's New York Stock Exchange-listed shares will cease to trade publicly, it said. The world's largest pork processor will then begin to operate as a wholly owned Shuanghui unit.

Shuanghui, China's biggest meat processor, will pay Smithfield shareholders $34 cash for each share held, a 31 percent premium to the price when the deal was announced in May.

The proposed acquisition sparked debate over the deal's implications for US food safety. Both companies asserted the merger was driven by growing pork demand in China and not a strategy to export pork to the US. The merger failed to raise antitrust concerns because it doesn't give Smithfield - already the world's largest hog farmer and pork producer - a larger share of the US pork market.

Two weeks ago, the Committee on Foreign Investment in the United States (CFIUS), a collection of federal agencies that reviews foreign purchases for their national-security implications, approved the transaction at the end of an extended 45-day investigation, clearing the way for the shareholder vote. 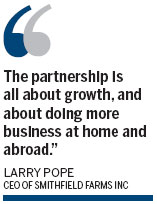 Some analysts predict the Smithfield deal will be a watershed event that will lead to more transactions tied to an ambitious effort by Beijing to obtain raw materials and technology needed to run China's growing economy. China's robust growth over the past three decades, putting it on course to overtake the US as the world's largest economy by 2020, has been accompanied by problems with food security and safety, as well as environmental pollution and health care.

Erik Gordon, a law professor at the University of Michigan Law School and Ross School of Business, told China Daily in an interview Sunday that any unexpected developments tied to the deal in the next five years could affect the outlook for future Chinese acquisitions in the US.

More deals could be in the offing "if Smithfield works out well for the Americans over the next five years", Gordon said. But "if Americans are fired, if Smithfield refuses to disclose information that is customarily disclosed in the US, or if anything else that is unusual happens, it will increase the fears and suspicions," Gordon said. "If China wants to acquire more US companies, it will have to handle Smithfield carefully," he said.

Smithfield and Shuanghui have said the acquisition won't result in major changes to Smithfield's management or workforce. Smithfield has more than 46,000 employees. With annual revenue of $13 billion, it has facilities in 26 US states, including the world's largest slaughterhouse and meat-processing plant, in North Carolina. It also has operations in Mexico and 10 European countries.

Michael Swanson, agricultural economist for Wells Fargo & Co Bank in Minnesota, said he expects the Smithfield acquisition will pave the way for more deals by providing a way for Chinese protein companies to learn how to manage food-related diseases. "Given the longer historical emphasis on food safety, US protein companies will have an advantage in controlling food borne pathogens until Chinese processors adopt the capital and practices required to compete," the analyst said.

The acquisition will help China, the world's largest consumer of pork, meet growing demand for the meat as its ever-prosperous citizens eat more protein. Smithfield's brands include its namesake ham, Farmland bacon and Healthy Ones lunch meats. It raises some 15 million pigs a year and processes 27 million, producing more than 2.7 billion kilograms of pork. Shuanghui, based in Henan province, owns businesses in food production, logistics and flavorings.

China to surpass US as top trader