Developed nations should enlist their "affluent multitudes" to aid in the fight against world poverty and hunger, Hong Kong's former Secretary for Home Affairs told a United Nations meeting.

"Every one of us, rich and poor, from the north and the south, the haves and have-nots, has a role to play," Patrick Ho said Wednesday.

The deputy chairman and secretary general of the China Energy Fund Committee, a Hong Kong-based nongovernmental think tank, was among more than 20 speakers reporting on their nation's or organization's progress in achieving eight Millennium Development Goals (MDG). The UN's 189 member states and more than 20 organizations agreed to achieve the goals by 2015 after the UN's Millennium Summit in 2000.

Although developed countries have boosted funding in support of the effort to achieve the goals, more than half the aid has been toward debt relief owed by poor countries, UN reports show. Much of the remaining aid funding goes towards natural disaster relief and military aid, which do not further development, according to the reports.

Noting that global efforts at achieving the goals have "always been concentrated on the underprivileged", Ho suggested that an effort be made, after 2015, to "also rally the affluent multitudes in the developed countries into action, and revisit an old concept of 'sustainability as a core value' for all".

"Our consumption should cater to what we need rather than what we want and desire, for desires can be insatiable and have no limits," Ho said. "It warns against greed, and calls for moderation." He urged the group to formulate "a set of specific goals on changing our unsustainable lifestyle", saying "the principle of sustainability should be incorporated into our daily lives and manifested by our every deed and action.

"It should not be just a slogan, policy, or a campaign," Ho said. "It should be our way of life." 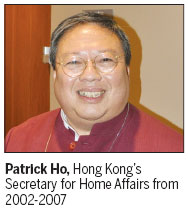 Ho emphasized China's progress in meeting the Millennium Goals and in helping to halve the number of people living in extreme poverty. "Out of the 700 million lifted out of poverty, 500 million are from China alone," Ho told the meeting.

While 1.2 billion people live in extreme poverty and 12 percent of the world remains chronically undernourished, "a third of the food produced globally for human consumption, or 1.3 billion tons per year, gets wasted", he said. The United States, he said, produces $200 billion in "avoidable" food waste a year.

In an interview after the meeting, Ho acknowledged that nations' overall progress in reaching the goals has been uneven. Some countries have reached many goals, while other countries are struggling to achieve even one, reports show.

In 2008, the World Bank estimated that the number of people living on less than $1 a day had been halved, mainly due to China's and India's poverty-fighting efforts. Notwithstanding these strides, areas such as the sub-Saharan Africa regions have yet to make any drastic changes in improving their quality of life, according to UN statistics.

Critics also have complained about the difficulty of measuring progress in reaching the goals.